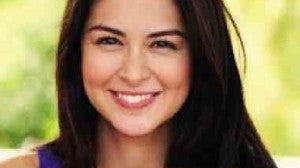 Marian Rivera’s climb to the top of the show biz ladder has had occasional bumps in the road—that’s why the Kapuso network’s prized possession says it isn’t wise to leave everything to chance if you crave success and longevity: “You have to like what you do. If you love your work, you open yourself up to possibilities, then you can do anything!”

When GMA CorpComm’s Rica Torres and Innah Montes invited us to join, among others, Rivera, Lovi Poe, Rocco Nacino, Charee Pineda and Solenn Heussaff for the network’s Kadayawan festivities in Davao City last weekend, we happily acquiesced. It’s been two years since we last saw Marian, after all.

Through the years, we’ve noted how the actress has reinvented herself for the better—from an indifferent rising star to the easygoing conversationalist she is today.

She attributes her relative accessibility and bubbly countenance to her new management—and to boyfriend Dingdong Dantes: “Dong has no intention of changing me—he just wants to ‘enhance’ my positive traits, because I need to let people see the real me. Aloof kasi ako by nature.

“It’s been four months since I joined Instagram and Twitter, which allow me to keep in touch with my followers, who now see the places that I go to or know what I eat. I can’t please everybody, but the social media made me realize that there are a lot of people who genuinely like me!”

The 29-year-old actress willingly answered all the questions thrown her way, but she would protest and shriek with laughter when the probing queries turned to her lucrative investments or botched endorsement deals. Truth is, we’ve never seen Marian happier and more relaxed.

How do she and Dong resolve conflict? She admits, “In the few disagreements we’ve had, the problem didn’t come from Dong. Maarte kasi ako (laughs). We’re both busy, so instead of fighting, we prefer to enjoy each other’s company when we’re together—like when we travel to Bali and Cambodia.

“Yes, we’ve also discussed settling down—but we still have a lot more to accomplish. We love surprising each other. He’s a good influence on me—he makes me a better person. But, we don’t have to seek each other’s permission—like, hindi ko na kailangang ipagpaalam sa kanya para mag-pose sa FHM.” (The lovely actress was adjudged FHM’s sexiest woman recently.)

In October, Marian will dabble in producing via “Kung Fu Divas,” her costarrer with AiAi delas Alas. Did her cameo in Vilma Santos’ award-winning Cinemalaya indie, “Ekstra,” inspire her to venture into indie filmmaking? She replies, “Appearing in ‘Ekstra’ made me realize that ‘going indie’ is something I can do, especially if there’s a challenging role or a good concept for me.”

What was it like working with Ate Vi? Rivera quickly answers, “Now I know why she’s called the Star for All Seasons! I kept asking myself, ‘Am I dreaming?’ Initially, nahiya ako—but, from the start, she made me feel comfortable.”

Vilma and Marian are the only actresses who have portrayed both Darna and Dyesebel onscreen—doesn’t Marian find it “symbolic”? She quips, “That’s flattering, but Vilma Santos is Vilma Santos—there’s nobody like her!”