Gallaga not afraid of failure 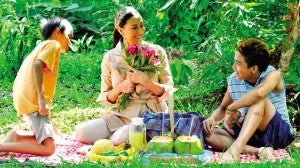 It’s not everyday we get to watch a film as beautiful as Peque Gallaga and Lore Reyes’ “Sonata” (runs Sept. 11-17 at the Sineng Pambansa in all SM Cinemas). We gave it a unanimous rating of “A” at the Cinema Evaluation Board, which rarely happens. It’s about an opera diva (Cherie Gil) on the verge of a nervous breakdown after losing her voice. She returns home to Negros Occidental and through a young boy (Chino Jalandoni) rediscovers her art and life. They both discover the healing power of love.

Just like Gallaga’s other masterpieces, “Sonata” is a total sensory experience. It moves you in a way you may not think possible. It softens your heart and makes you appreciate the simple joys of life. Kudos, Peque for your inspired madness, which we all hope to imbibe. Thank you for showing us that we should never lose our joie de vivre and “craziness,” no matter where life takes us.

How did “Sonata” come about?

About five or six years ago, Cherie and I were drinking. I felt she was starting to feel her mortality, maturing into a midlife crisis and losing her voice, so much so, that she was facing throat surgery. And sure enough, it wasn’t long before she brought up the idea that she wanted to produce a movie; I guessed that she wanted to confront this crisis in the best way an artist knows how—through her art. It’s no

secret that I love working with this woman and I immediately said “yes,” but all that I came up with, as far as ideas were concerned, was … a movie about an opera singer who has lost her reason for being [after she] lost her voice. And then Cherie went into hibernation.

Years after, the Film Development Council of the Philippines (FDCP) initiated the All-Masters Edition and asked Lore Reyes and myself for a movie. Lore said that it was a good time to tackle the Cherie project. I felt I wasn’t in any shape to tackle the story or the script. So we turned to Wanggo, my son. He came up with the idea of a broken diva, who hides away from the world inside her home in a

Negros plantation. And from there, “Sonata” actually went through the birthing process.

What message do you want to impart via “Sonata”? 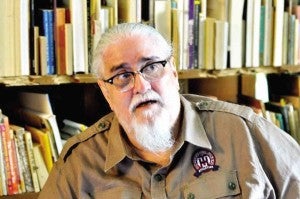 “WE HAVE often been accused of being ahead of our time—and it’s true.”

I don’t believe the movie (or art for that matter) is the medium for sending out messages. If you want to send messages, there’s Facebook and Twitter. I think a movie that sets out to tell you what to think or how to think about any one thing becomes pedagogic or didactic or propaganda. So we stay away from these kinds of movies.

“Sonata” deals with life and death and discovery, with connecting and forgiveness, with language and art, with taking responsibility for one’s actions. Sonata is a music form in the world of music, but in Hiligaynon, sonata simply means song. Lore and I were dealing with singing as an art form, musically, but also the “music” of the Negrosanon countryside. It’s when the boy teaches the diva to listen to the sounds of the night that she rediscovers her music, her art and her life. So the movie is about how art impacts our life.

What’s your advice to aspiring filmmakers?

Make your world bigger. Go out of your comfort zone and expose yourself to art forms that you have no taste for. Don’t just stick to watching hundreds of movies; most of the time we’re just picking up tricks and techniques, we’re not picking up ideas. Go around your own country and see how other people look at the world. And read, read, read.

How would you assess the state of Philippine cinema now and where is it headed?

I think we are at the dawn of very exciting times for Philippine cinema. The whole enterprise is exploding with new and unexpected possibilities—from the idea of creating huge movie concepts from your bedroom … to the idea of a truly national cinematic art form that accepts stories told in Ilocano, Bicolano, Cebuano, Kapampangan, Tausug and Hiligaynon, atbp.

What we need are young producers who will be able to make the connection between the artists and the paying public, and who know how to deal with the theater owners and the distributors. We need young juicy Mother Lilies. We need young Joey Gosiengfiaos and Douglas Quijanos who are alive.

Who are the easiest stars to direct?

The easiest stars to work with are artists who are true professionals and who are steeped in the traditions of professionalism.

Being the icon that you are, don’t you feel pressured to outdo yourself with every project?

What’s the “Peque Gallaga” formula for a masterpiece?

There are no more Gallaga masterpieces since the late 1980s; only Gallaga-Reyes masterpieces. If there is any kind of formula, it’s the idea that although we hate failure, we are not afraid to fail. We are not afraid to make mistakes. We have always been studio outsiders in this regard. Our loyalty lies in the project itself, not in the bottom line. We have never, and I say this as a point of pride, never, never, never made a movie for an international film festival. We never entertained the sensibilities of the European, American moviegoer or the Urian.

But we always try to make intelligent movies; movies that are honest, original and have a sense of humor. We have often been accused of being ahead of our time—and it’s true.

How do you handle stars who are pasaway on the set?

Our set respects all professionals from the superstar diva to the utility boy. We respect not only their talent; we also respect their time.

The scene and the work ethic, and not the director, become God. People are allowed and encouraged to make mistakes, because they are encouraged to try to go beyond their normal limits.

We probably had only about four pasaway actors in the 40 years of filmmaking, but the good Lord never answered our prayers: They were never struck down with leprosy or botox allergic reactions. The little starlets who came in late were sent packing back home in the same taxis that they came in.

Any quirks / rituals you do on the set before you start shooting?

There is always the first-day briefing. The message is always the same: What we are about to do now is the most important thing you will ever do in your life for now.

When we’re on location especially in wild, unknown territory that may involve elementals, I will personally sacrifice three chickens—

involving the cutting off of heads and sprinkling their blood on the ground while murmuring secret prayers taught to me by another director from Lucban. The first time I did it in the forests of Mambucal, I stupidly used a dull bolo to cut off the chickens’ heads and I freaked out more than the chickens did.

No peanuts or butong pakwan on the set.

He always lives in mortal terror of most everything, but will always say yes to anything new. He is a slave to talent—when he considers you truly gifted, he will serve your gift because it comes from somewhere bigger than our understanding.

I can’t deal with children below 8 years old on the set. That’s Lore’s department.

He was never afraid to say no. Just like a whore. Hahahahaha!