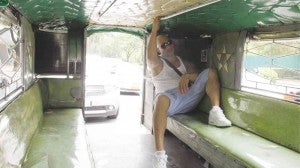 Breaking into a smile, Vin added, “I like the warmth of the people in the Philippines. I don’t know [how to] describe it…if you go there, you will know what I mean.”

He exclaimed, “I love the Philippines! My sister-in-law (Grace Blanco) is from there.”

Asked about his photo aboard a jeepney that went viral in the social media, Vin answered, “I put up that picture because I was really traveling around in a jeepney. If you don’t know what a jeepney is, it’s like a very small open air bus that is indigenous to the Philippines. It’s kind of a trademark of the Philippines.”

He talked some more about the colorful, iconic vehicle that Filipinos created from surplus military jeeps left by the US forces at the end of World War II. “So many people wrote on my Facebook page, ‘Oh my God, I can’t believe you’re not in a limo.’ ‘I can’t believe you are not in a helicopter.’ ‘You are in a jeepney—a public transportation?’ I thought to myself, if they only knew that the jeepney is like a Central Park horse-drawn carriage ride to me. I grew up in a subway. So the difference between a horrible, dirty subway and a beautiful chariot like a jeepney is night and day.”

He continued: “So everyone was acting like I was doing something ‘common folks-y.’ They don’t realize that…anyone who grew [up] in New York would have [considered] the jeepney the coolest ride in the world. So for me, being in a jeepney was a step up.”

Vin—who stars in “Riddick,” the third installment of the sci-fi franchise—will play Kojak in the film adaptation of the hit TV series that featured the late Telly Savalas. He said, “We are waiting for the script from (Neal) Purvis and (Robert) Wade. For me, the most powerful thing was that Universal was very clever to get the two guys who did the origin story for James Bond, the writers of ‘Casino Royale’ and ‘Skyfall,’ to also pen the origin story of Kojak. Hopefully, we are shooting soon.”

About the bald, lollipop-sucking NY detective Kojak, Vin gushed, “He is such a fun character for me to…be excited about because I grew up in downtown Manhattan. When I was 7, Telly Savalas was shooting around my neighborhood and had to come into my building as a holding area. I was in an elevator and Telly came in like a gangster. No way in the world was I thinking that I would play Kojak someday! Was Telly thinking, that kid is going to play me 40 years from now?

“I am also very excited because I get to celebrate New York. Ultimately, Kojak is a representation of New York. I feel like I know New York so well…I watched them build the Twin Towers. And I watched the two towers come down.”

Vin disclosed during the luncheon that it was his 3-year-old son’s birthday but that he came anyway to accept a grant in behalf of the Sundance Institute because that organization founded by Robert Redford was important to him. The actor, who has another child (Hania Riley) with partner, Mexican model Paloma Jimenez, stressed that fatherhood has changed him. “You know what my son said to me as I was leaving? He said, ‘Daddy, I want to have cake with you!’ It has really changed me. The girl is 5. They (children) are my favorite people in the world. How does parenthood change people? In more ways than you could ever describe. You are a different person. You are no longer here just for yourself. You have a higher purpose.

“You have to be a role model for these kids, which is always an interesting thing to realize. It changes the way I work. There’s always a part of me that’s thinking, what would it be like when my little angels see my movies? It’s going to change what movies I choose. I can’t do a million ‘Riddicks,’ obviously.”

Any plans to marry Paloma soon? “Let’s say I made it on time for the kids,” Vin replied with a grin. “We didn’t get to the chapel, but things are going at their natural pace.”

After working with Justin Lin in the previous “Fast and Furious” hits, Vin is giving another director of Asian heritage a try—James Wan, whose credits include “The Conjuring” and “Saw.” Vin explained, “There really is no point in doing a ‘Fast 7’ if you can’t defy expectations. That’s what we are going to do in ‘7.’ You are getting a director who lives in a different space, with a different sensitivity, which will help in giving the film a different perspective. You can imagine how every single scene is going to be shot by a person who has mastered the art of subtle tension, who has done such a great job of creating characters you invest in.

“When we set up to do ‘Fast 7’ and the studio came up with this concept of using James Wan before ‘The Conjuring’ came out, it was very clever because that was going to add a different element to ‘7.’ The Dom (his character) and Letty (Michelle Rodriguez’s character) core of the story is now going to evolve and mature. There will be some heavy issues in this movie. We have a new, interesting cast. I am excited to see what James does behind that lens.”