Boots shows no signs of slowing down 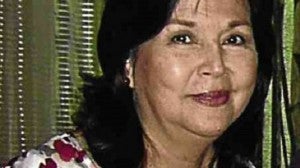 Retirement is a word that doesn’t exist in Boots Anson-Roa’s vocabulary. At sixtysomething, she remains one of the busiest actors in the biz—and shows no signs of slowing down: She holds office at Mowelfund, teaches at UP and Ateneo, and continues to act in films and television shows.

“It’s how I’d like to repay the industry that has been good to me,” she shares. Boots is cast in TV5’s “Misibis Bay” as the grandmother of Ritz Azul who has an axe to grind against the family of resort owners, Christopher de Leon and Vivian Velez.

Busy as a bee, the durable actress also taped for Derek Ramsay’s “Undercover,” but begged off when the network decided to make it a daily series. TV5 also wants her in the cast of the upcoming soap, “Silay,” which will be shot in Negros Occidental.

Roa is just as busy making films: She has completed Adolf Alix’s “LRT” and Buboy Tan’s “Tabla, Talo, Panalo,” both with Eddie Garcia.