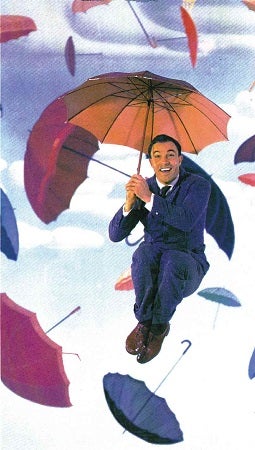 KELLY. His achievements continue to shine like blazingly bright beacons over the performing scene.

Fans of the all-singing, all-dancing entertainment icon, Gene Kelly, will mark his 101st birthday on Aug. 23.

He won’t be around to celebrate the landmark event, having left us in 1996 at age 83—but, his grateful fans will definitely make up for the slack. To them, Kelly’s achievements on film and in the theater were so significant that they continue to shine like blazingly bright beacons over the performing scene.

Famous for his exceptional talents as dancer and choreographer, Kelly got clued into his life’s vocation and profession very early, because his mother ran a dancing school—in fact, she named it after him!

When the Ballet Russe passed through Pittsburg, he turned down an offer to join the famed ballet troupe, because he had his sights trained on Broadway and Hollywood. —Unfortunately, when he finally got to New York, he had a hard time achieving his dream of stardom.

Still, he persevered: Choreographer Robert Alton put him in Mary Martin’s 1938 show, “Leave It To Me,” and later cast him in his first big success as Harry the Hoofer in William Saroyan’s “The Time of Your Life.” He up and married another dancer, Betsy Blair—and, in 1940, clinched the most coveted assignment on Broadway, the title role in “Pal Joey.” —Finally, Gene Kelly was on his way!

The movies soon followed, and MGM got him to star in one musical film after another—“Cover Girl” with Rita Hayworth, “Anchors Aweigh” with Frank Sinatra—etc.

Other now iconic musical films that had Kelly on board as dancing star and/or choreographer include “On The Town” (the first musical shot on location); “An American in Paris,” which won six Oscars, and “Singin’ in the Rain” with Debbie Reynolds, Russ Tamblyn and other great musical performers (some movie buffs hail it as “the apotheosis of the MGM musical”)!

Unfortunately, the movie musical trend eventually passed its peak, but Kelly is still remembered for his iconic productions in the ’40s, as well as other great musicals like “Brigadoon,” “It’s Always Fair Weather,” “Invitation to the Dance,” “Les Girls,” “Les Demoiselles de Rochefort,” “Marjorie Morning Star,” “Summer Stock,” “Deep in my Heart” and “Let’s Make Love.”

Kelly was also tapped in his mature years as one of the host/narrators of the “That’s Entertainment” series that paid homage to and excerpted the best musicals that Hollywood has ever produced. Many of those great musicals featured him, reminding viewers of his unequaled contributions to the once-popular film genre.

In the past decade, musical films have been making a big, bright comeback, with glittering successes like “Moulin Rouge,” “Mamma Mia” and  “Hairspray.” So, Kelly’s iconic and pioneering contributions are inspiring a new generation of filmmakers and movie buffs, as well.

Aside from his own work, Kelly is credited with discovering Stanley Donen, who became a famous director-choreographer in his own right, and other standout dance mavens like Bob Fosse have gratefully admitted to being Kelly’s avid acolytes and devotees.

So, on Gene Kelly’s birthday on Aug. 23, there’s a whole lot to celebrate! For starters, we urge our movie channels to mount retrospectives of Kelly’s “best-est” films!