Thanks for the golden ‘Memories’ | Inquirer Entertainment
Close
menu
search

Thanks for the golden ‘Memories’ 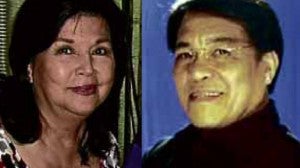 ROA AND NEPOMUCENO. Their “habituating” show should find a more appreciative venue.

In many people’s homes, Sunday afternoons are reserved for watching and listening to the “musical nostalgia” show on dzMM-TV, “Music and Memories,” hosted by Boots Anson-Roa and Willie Nepomuceno.

Imagine those regular listeners’ dismay and consternation, therefore, when it was announced last Sunday that tomorrow’s broadcast-telecast will be the popular and “habituating” show’s literal “swan song,” because it has been terminated by management for not suiting the station’s target listenership.

We can bet, therefore, that many people will be catching the program’s farewell telecast tomorrow, to show their appreciation, support and dismay over its unexpected demise.

To add insult to injury, tomorrow’s  telecast marks the program’s sixth anniversary on the air. Understandably, therefore, some of the show’s fans have been railing against the decision to nix “Music and Memories” despite its popularity, uniqueness and good commercial load, and want to persuade management to rescind its unpopular verdict.

For our part, however, our stand is: If dzMM doesn’t feel that the show is “right” for its purposes, the program’s fans shouldn’t fret, because it’s likely that another radio-TV station will pick it up soon for a more appreciative airing.

Should that come to pass, the show will continue to enjoy preferred viewership from its “habituated” fans, who will simply transfer allegiance to the program’s new home, no long-term harm done.

In the meantime, Boots is flying to the States soon to screen some Filipino movies for a number of Fil-Am communities, to raise funds for her advocacy of choice, Mowelfund. She will be gone for a couple of weeks, and when she comes back, the furor over the fate of “Music and Memories” hopefully shall have been resolved.

We’re optimistic about the Sunday show’s “survival” under a more enlightened broadcast dispensation, because it fills a felt need for nostalgic songs and musical reminiscences.

Aside from its hosts’ own music-related recollections, the program is further enriched by the phoned-in comments and anecdotes shared by quite a number of other music lovers, including a number of celebrities like Jose Mari Chan, whose great store of musical information is comprehensive and thus most helpful.

Even the hosts’ occasional “senior moments” are doted on by the program’s fans, many of whom are similarly advanced in years and implicitly “understand” how seniors’ mental synapses have a wacky penchant for not making the right connection!

Instructively, however, the show also appeals to some younger people, who find the songs it features “timeless,” and are intrigued by the stories its hosts and their phone-in friends share about otherwise “forgotten” musical icons like—Nelson Eddy and Jeanette MacDonald!

Truth to tell, the program’s unique scope and format are appreciated by a wide range of fans, hence its having been emulated or downright imitated by some newer shows.

That’s why we’re confident that, despite its having been axed, we haven’t seen and heard the last of “Music and Memories”—which, if there’s any justice and logic left in the broadcasting world, should soon resurface on a more welcoming station, to regale us again with its unique mix of golden songs and their similarly “olden” fans’ loving recollections!

Read Next
Tommy Abuel recalls working with film masters
EDITORS' PICK
1,797 more Covid-19 infections raise PH active cases to 33,603
New Year, New Rediscoveries
Acer Philippines welcomes you to its first flagship store
UP president challenges AFP claim on Reds’ campus infiltration
WHO says fabric facemasks still work against virus variants
Is your company a growth champion? Stand up and be recognized!
MOST READ
Wife stabs husband after seeing her younger self in old photos, thought he was cheating
NBI files raps vs top execs of 2 tech firms
Ate Vi’s message to those against ABS-CBN’s franchise renewal
Cop, 12 others killed in Maguindanao shootout
Don't miss out on the latest news and information.