‘It was a good year for theater actors who got to share the limelight with mainstream stars like Vilma Santos’
By: Bayani San Diego Jr.
Philippine Daily Inquirer / 12:22 AM August 07, 2013

When the name of Jasmine Curtis-Smith was announced on Sunday night as best supporting actress in the New Breed section of the 9th Cinemalaya Philippine Independent Film Festival, a loud shriek was heard backstage at the Main Theater of the Cultural Center of the Philippines.

JOEY Paras dedicates his trophy to his mentors. Photos by Arnold Almacen

Observers thought it was Curtis-Smith, who had just nervously stepped off the stage after presenting several trophies.

Irma Adlawan, Curtis-Smith’s costar in Hannah Espia’s “Transit, later confessed to the Inquirer: “I was the one who screamed. I was ecstatic for Jasmine.”

Adlawan likewise won, as best actress for the same film, which focuses on the plight of Israel-based Overseas Filipino Workers whose children face deportation. 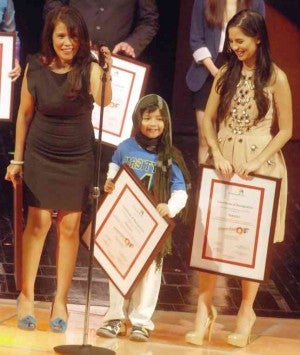 It was pretty obvious that Adlawan and Curtis-Smith, who play mother and daughter in the film, had bonded throughout their 10-day stay in Israel. They can even finish each other’s sentences now.

“She helped me become her daughter,” said Curtis-Smith.

RUBY Ruiz is glad that theater people are now recognized by the public.

“We had to be supportive of each other … otherwise it wouldn’t have worked,”

Adlawan added. “We talked a lot on the set. And we kept looking for rice in Israel.”

“We walked quite a distance to find a restaurant that served rice,” Curtis-Smith recalled. “On the set, before each take, we would throw Hebrew lines back and forth, to really feel and understand the dialogue.” 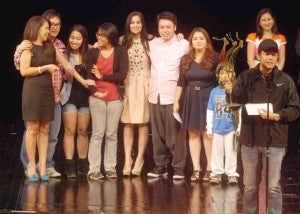 THE CAST and crew of “Transit,” led by producer Paul Soriano who stumbled on Hannah Espia’s concept at a pitching forum held during last year’s Cinemalaya.

A transgender performer in a Makati club, acting neophyte

Jureza could well be the first best actor in the world who received his trophy dressed in a bustier gown.

Fighting off tears, Jureza told the Inquirer that his mother was the first person he called after the awards show. “My mom is in Davao. I live on my own here. My family knew that I made an indie film, but they didn’t know that I was nominated.”

To think he almost didn’t land the part. “I read about the casting call on Facebook,” he related. “I e-mailed my photo but didn’t get a response. Good thing my friend sent another picture, which was approved.”

Other critics would have been in a quandary whether to declare Juareza best actor or actress, but the judges knew he was a winner either way.

Juror Carlitos Siguion-Reyna said the jury opted to steer clear of gender issues and just focus on the craft. “We respect the film’s advocacy … but we just stuck with the scientific definition of best actor.”

Co-juror Peque Gallaga recounted: “We agreed to talk about movies and not about politics.”

Among the winners from the theater scene are Adlawan, Paras, O’Hara and Ruby Ruiz (of “Ekstra,” best supporting actress for Directors’ Showcase).

Ruiz explained that, for her, “theater discipline spelled the difference.” Her stint with the Philippine Educational Theater Association (Peta) instilled in her the value of team work and preparation. “This is my first award…  a product of all my years in theater. But I couldn’t have done it without my fellow actors in ‘Ekstra.’”

Paras agreed: “Stage is a good training ground. That was where I grew up. I offer my trophy to Irma (Adlawan) and my other mentors. Finally, all the hard work and passion for my craft got noticed.”

Still, these theater thespians are not averse to crossing over to more commercial fare.

O’Hara, who dedicated his victory to his uncle (the late TV-movie-theater actor-director Mario O’Hara), said in jest: “I made my short film with a budget of P3,000 so that I would also get noticed and hired as an actor for television shows and films.”

Ruiz said: “People don’t know our names and faces because we melt into our characters. But now we are slowly being recognized.”