Peque and Lore team up again for a very personal film–a reunion on so many levels
By: Bayani San Diego Jr.
Philippine Daily Inquirer / 11:20 PM August 06, 2013 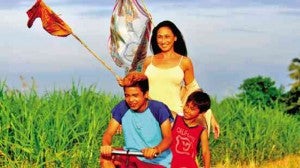 In a lot of ways, it was like a summer reverie for filmmaker Peque Gallaga, who returned to his home province of Negros Occidental to shoot his latest work, “Sonata,” last April.

To make the movie more nostalgic, some scenes were shot in places where his grand solo debut, “Oro, Plata, Mata,” was filmed 31 years ago.

It was a homecoming of sorts for Gallaga, a chance to relive the halcyon days of his youth. “I grew up in Manila, but every summer, we would visit Negros,” he recalled. “As a kid, I got to run in the fields and explore the countryside.”

Funny thing was, Lore Reyes, Gallaga’s codirector in “Sonata,” was behind the camera when those same pastoral scenes were shot for the film.

“When I was watching the rushes, I thought to myself: Lore was able to recapture my childhood,” Gallaga conceded.

Frequent collaborators Gallaga and Reyes have become so intertwined artistically that even their memories seem to intercut and intersect. 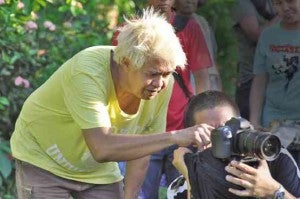 “Directing with Peque again, after 12 long years, was a real pleasure,” Reyes said of the reunion project.

Like in their previous ventures, Gallaga and Reyes devised an efficient system to divide their labors.

Since their latest collaboration, “Sonata,” an entry in the All-Masters Edition of the Sineng Pambansa (mounted by the Film Development Council of the Philippines), is an “indie” production, they had to be extra creative.

“To save costs and limit the shooting days, we made arrangements for a two-unit setup so that Peque and I could work simultaneously in separate locations for three days,” Reyes explained.

They finished the film in eight shooting days, Gallaga volunteered.

Now, for a reality check.

Although Silay, Cadiz and Manapla in Negros looked idyllic onscreen, the shoot was “punishing,” Reyes owned up. 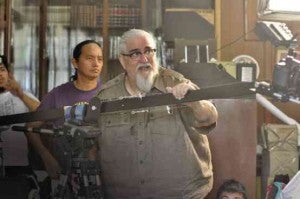 “Our shoot coincided with some of the hottest days on record,” Reyes looked back. “Some of us ended up with serious skin burns.”

Sunburn and all, it still turned out to be “gratifying” for Reyes and Gallaga.

“No matter how difficult a sequence was, the mood on the set was cool and laid-back,” Reyes said.

“Sonata” also marked Gallaga’s big-screen reunion with Cherie Gil, who was a lead actor in “Oro, Plata, Mata,” too.

Gil so believed in the screenplay (which Gallaga’s son, Wanggo, wrote) that she assumed the role of coproducer in the film as well.

“Cherie and I have been wanting to make a film together for the longest time,” Gallaga said.

At first, the movie in their mind seemed too expensive and unattainable. “Cherie decided to act in more soaps and save up some more,” Gallaga said.

That was five years ago.

When the Sineng Pambansa launched the All-Masters Edition last year, Gallaga, Reyes and Gil finally had the chance to fulfill a long-cherished dream.

Other kind and generous souls came onboard, too: from post-production house Central Digital Lab to audio-post firm Wildsound Studios.

Judging from the film’s long end credits, it seemed the entire Negros island pooled its resources together to make this movie possible. “We were allowed free use of the Jose Gaston mansion in Hacienda Rosalia (which was also the main location in ‘Oro’),” Reyes said.

Friends and family—from the Higginses, Mendezonas, Smiths, Baltazars, Ciocons, Gallagas to Gov. Alfredo Marañon and Rep. Albee Benitez—similarly went out of their way, lending them costumes and providing them with homes, tents and food throughout the shoot.

Another plus factor: Gallaga and Reyes tapped disciplined and competent crew members from Negros—

most of them products of their annual workshops.

“Since 1991, we’ve been conducting the Negros Summer Workshops, which has produced several generations of well-trained technical film workers,” Reyes remarked.

“Sonata” likewise served as a reunion with their past students, who are now professionals in their respective fields. “The shoot was a joyous occasion,” Gallaga reminisced. “We had 40 people in the staff—only five came from Manila.” (Hiring Negros-based crew was a big cost-saver, too.)

It was like going full circle for Gallaga—especially since Gil’s 10-year-old costar, Chino Jalandoni, “is the grandnephew of Joel Torre,” the same actor who was launched to full stardom in “Oro.”

“Chino was completely natural. No tricks at all,” said Gallaga.