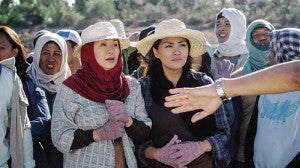 VILMA Santos thanks fans, her “fellow bit players” and the film’s guest stars.

Santos told the Inquirer that the film’s success left her at a loss for words. “I was so nervous, since this is my first indie film,” she said. Hearing that people had lined up and were entertained melted away all her apprehensions.

Santos thanked the viewers who flocked to the Cultural Center of the Philippines (CCP), Greenbelt, TriNoma and Alabang Town Center (ATC). “I am so thankful to the fans…the entire ‘Ekstra’ team, my costars and my fellow ‘bit players’ in the film. I also owe a lot to the big stars who agreed to make cameos in the movie.”

Santos found the film’s strong performance inspiring. “I hope to [make more indie films in the future]…but being a public servant is still my priority,” she said.

According to figures (as of August 2) provided by fest organizers, “Ekstra” bested four other Directors’ Showcase entries.

The box-office hits had repeat screenings in their respective venues on Sunday.

Chris Millado, festival director, told the Inquirer: “As of August 2, CCP figures had already hit P3 million, which was last year’s benchmark. We expect to break the record. Based on audience attendance and sold-out screenings, this year’s fest is definitely more successful than last year.”

Jeturian noted: “I’m pleased that the audience liked our film. I am especially happy for Ate Vi that her first foray into indie films is a commercial and artistic success.”