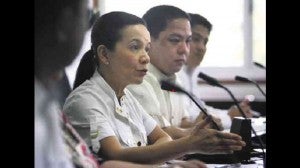 MANILA, Philippines—The Movie and Television Review Classification Board has asked the Senate for P2.1 million to sustain its fight against pirated and pornographic films.

MTRCB chair Grace Poe-Llamanzares said the agency wants to post stickers inside 35,000 public utility vehicles in Metro Manila warning against the exhibition of pirated and obscene films onboard.

Each sticker costs P60, she said.

“The bus companies are aware of this already because the implementation began in June.  The advisory would be for the passenger.  The sticker would carry a number the passenger can call to alert authorities about offending buses,” she told the Inquirer in an  interview.

As it is, the government plans to allot P42 million to the MTRCB for its various projects next year.

Poe-Llamanzares hopes the Senate finance committee would consider giving the MTRCB more funds to bolster its projects, such as its efforts against film pirates. She noted that the board’s 2012 budget is smaller than this year’s P43 million.