No more Cinemalaya screenings in UP; awards Sunday night 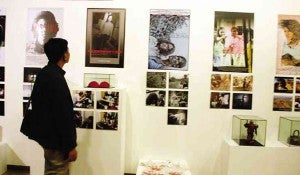 AN EXHIBIT showcases film posters and memorabilia at the Little Theater lobby. Photo by Arnold Almacen

Cinemalaya movies will no longer be screened at Cine Adarna of the University of the Philippines (UP) in Diliman – after eight years of being part of a program presented by the UP Cineastes’ Studio.

Based at the UP College of Mass Communication, the Cineastes’ Studio is a pioneering student film organization for film buffs established in 1984.

Cinemalaya entries from years 2005 to 2012 were shown at the state university as part of the group’s efforts to “promote film appreciation and awareness” among the youth.

A statement posted on the group’s Facebook page reads: “Starting this year, UP Cineastes’ Studio will not be holding ‘Cinemalaya Goes UP.’” It said the decision was arrived at last March by the Cinemalaya board of the Cultural Center of the Philippines (CCP) “due to the accessibility of venues for screening [outside of] what the organization offered in the past years.”

Apart from the CCP in Pasay City, Cinemalaya 2013 films are screened in three satellite venues—TriNoma in Quezon City, Greenbelt in Makati and Alabang Town Center in Muntinlupa. The festival ends today.

The statement pointed out: “Cineastes was the student arm of the Cinemalaya and helped in creating the audience that [the indie fest] has today.”

Chris Millado, festival director, confirmed the news: “We decided to discontinue the program with the UP film club because of its proximity to the Cinemalaya dates at TriNoma [which is the closest satellite venue to UP Diliman]. But we are still open to outreach screenings after the festival.”

Which means Cinemalaya films can still be shown in UP, but individually, not as part of one presentation.

Rolando B. Tolentino, dean of the UP College of Mass Communication, expressed sadness over the discontinuation of “Cinemalaya Goes UP.”

Tolentino pointed out, “UP is crucial to film audience development, as it has a built-in community that possesses academic excellence, social-networking visibility and appreciation of 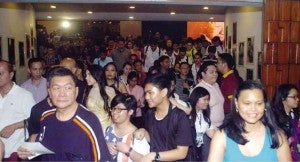 CROWDS flock to the CCP for this year’s festival. Photo by Arnold Almacen

According to Tolentino, UP is one of two venues in the country— the other being the CCP— allowed to screen films that did not pass through the Movie and Television Review and Classification Board. “It has always helped that, for academic reasons, UP is exempted from censorship rules,” he asserted.

“UP has been with Cinemalaya since its founding in 2005,” Tolentino said.

The UP Cineastes’ statement concluded: “Despite this [development], we still encourage the patronage of our local cinema. [We] shall continue with [our] goal of promoting film literacy through screenings and other events.”

The Cinemalaya awards ceremony is set tonight at the CCP Main Theater.