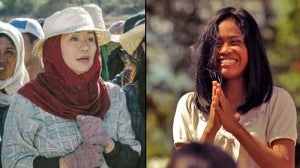 Cinemalaya’s 2013 edition has its share of head-scratchers—from Gil Portes’ well-intentioned but frustratingly crude “Liars” to Christopher Ad. Castillo’s confounding chiller, “The Diplomat Hotel,” and Emmanuel Palo’s lumbering three-in-one tale, “David F.”—but, even those underwhelming films have narrative elements that ring true to the indie spirit that the annual filmmaking event  has championed since 2005.

The festival is as much a showcase for screenwriters and directors as it is for brave actors who wish to inhabit roles that allow them to “stretch” and grow—like Vilma Santos. In Jeffrey Jeturian’s instructive socio-realist drama, “Ekstra,” the screen queen turns in one of the finest performances of her career—as bit player Loida Malabanan.

For naysayers who scoff at the actress’ penchant for physical acting, here’s a movie that shows the egoless Vilma—warts, wrinkles, eye bags and all—at her quietly insightful and vulnerable best, as she fights for better roles on the set of a teleserye that must finish 45 sequences overnight.

She’ll break your heart especially in scenes that require no dialogue, particularly in the sequence that shows Loida quietly watching her botched scene with Cherie Gil and Pilar Pilapil. Hers is the performance—and film—to beat in the Directors’ Showcase. Marlon Rivera, Vincent de Jesus and Tart Carlos also acquit themselves well in the movie.

In “Sana Dati,” the exceptional albeit protracted final installment of Jerrold Tarog’s Camera trilogy, Avelino delivers a well-limned, award-worthy performance as videographer Dennis Cesario, who throws a wedding in disarray when he reminds the bride (Lovi Poe) of her former fiancé, Arthur (Benjamin Alves)—who happens to be Dennis’ older brother!

Avelino also comes on strong in Yapan’s mystical love story, “Debosyon,” which boldly examines the dynamics of love and faith in the romance that develops between orchid-picker Mando, a devotee of the Virgin of Peñafrancia, and Saling (Mara Lopez), a mysterious maiden who’s forbidden to leave the jungle by a curse that threatens to keep her and Mando apart.

The conflict in Ces Evangelista’s provocative 16th century drama, “Amor y Muerte,” is vivified by the cheerless marriage of Spanish soldier, Diego (Markki Stroem), and Amor (Althea Vega, who sizzles in the role), the daughter of an insurrecto—especially after she finds sexual fulfillment in the arms of a snake-wielding indio, Apitong (Adrian Sebastian).

“Liars” (about the young Tondo athletes who faked their way to the Little League world baseball championship in 2001), “David F.” (about three generations of African-American Pinoys), and “The Diplomat Hotel” (about a disgraced reporter’s search for redemption) demonstrate how an intriguing but underrealized premise can weigh down even the finest of actors (Alessandra de Rossi, Art Acuña)—although Gretchen Barretto’s perpetually “gulat” (startled) look is a snug fit for the latter’s murky horror.

Joseph Israel Laban’s “Nuebe” is about 9-year-old Krista (Barbara Miguel), who gets pregnant after her father molests her. The movie is a showcase for Jake Cuenca and Nadine Samonte’s evolving dramatic skills, but their film is gravely weighed down by a child actress who’s too smart for her own good—and whose “excesses” should have been judiciously vetted by her director.

We were also pleased to see Mikhail Red acquitting himself well in the full-length genre via “Rekorder,” about a movie pirate (Ronnie Quizon) who witnesses a crime. Truth is, we were concerned that the young filmmaker wouldn’t be able to expand a short-film concept and turn it into a sustainable story beyond a 30-minute running time. We’re glad he’s proven us wrong.

In Leo Abaya’s “Instant Mommy,” Eugene Domingo, who portrays a TV commercial wardrobe assistant who pretends to be pregnant (so that her still-married Japanese boyfriend won’t leave her), shares acting honors with leading man, Yuki Matsuzaki.

Ping Medina, Jasmine Curtis-Smith and Marc Justin Alvarez shine in Hanna Espia’s “Transit,” a fascinating look at a slice of the Filipino diaspora. It tells the story of a Pinoy caregiver in Herzliya who hides his 4-year-old son, Joshua (Alvarez), when the Israeli government implements a new law that aims to deport the children of migrant workers who are younger than 5 years old.

If you can watch only two films in the New Breed category, make them Carlo Obispo’s “Purok 7” and Eduardo Roy Jr.’s “Quick Change”—our top choices. They’re must-sees, not only because of their well-told tales, but also because of the indelible, career-making performances turned in by their lead actors.

The idiosyncratic “Quick Change” fields superlative portrayals from its whole ensemble, led by Mimi Juareza (as Dorina Pineda, a transvestite running an illegal cosmetic-surgery business), Miggs Cuaderno (as his precocious 8-year-old nephew), and Junjun Quintana (as his abusive lover, Uno). But, Dorina’s “ideal” life begins to fall apart when Uno falls in love with another tranny!

“Purok 7” follows 14-year-old Diana (the award-worthy Krystle Valentino) and her younger brother (Cuaderno again, in another notable turn) as they await the fate of their OFW mother, who’s been convicted of drug trafficking in China.

Obispo’s film is as heart-warming as it is gut-wrenching—it offers no quick-fix  solutions for its protagonists’ woes, but it’s nonetheless a convincing reminder of the healing power of love, friendship and the kindness of strangers!

These films prove that neither a marquee name nor a gorgeous face is crucial for the success of a movie—and every actor has to start somewhere.

As Vilma Santos aptly explains in “Ekstra,” even Lolita Rodriguez and Gloria Romero started out as body doubles for Carmen Rosales. When her friend reminds her that those actresses had high, aquiline noses, Loida snaps back at her, “Eh bakit si Nora Aunor…?”