LJ Reyes: Paulo is a good dad to our son 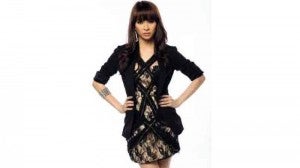 “HE MAKES time for his son; that’s the most important thing for me.”

“He is a good dad. I have only good things to say about him in that regard,” said actress LJ Reyes of Paulo Avelino, father of her 3-year-old son Ethan Akio.

The actress made this declaration amid rumors that they had broken up and that Paulo recently left their home. It doesn’t help that when show biz reporters ask Paulo, he consistently refuses to discuss the status of their relationship.

“He makes time for his son; I appreciate that. For me, that is the most important thing,” LJ told the Inquirer. Asked about her love life, the 25-year-old actress replied, “I’m happy, and I intend to keep it that way. I’d like people close to me to be happy, too.”

LJ admitted that she felt bad about leaving her son home to go to work. She is a regular performer in GMA 7’s weekly variety show “Sunday All Stars” and is currently preparing for a primetime drama series airing soon. “I try to make Aki (her son’s nickname) understand my job. Though he just turned 3, I explain things to him the way I talk to a grownup. I don’t do baby talk. He’s a very smart kid,” the actress said. “When he sees me getting dressed, he asks, ‘Work ka, Mommy?’ He likes seeing me dancing on SAS!”

This early, LJ can see that Aki is talented. “Sobrang bibo n’ya,” she said. “Sometimes, he pretends to cry when he sees [me or Paulo] crying on television. I don’t see him joining show biz anytime soon, but I’ll support him, should he realize it’s what he wants.”

LJ’s last Kapuso drama series was “Aso ni San Roque” last year. “I’m excited to be included in this new soap, but I’m not yet allowed to divulge details,” she said. “I’m preparing for it by attending workshops. I’m already feeling the pressure, but I’m sure it’s good, if only because this motivates me to do better.”

Asked how she’s able to balance work and motherhood, LJ said, “It was hard to adjust but I can manage now. I just make sure to eat healthy food and work out regularly at the gym. I’ve been suffering from migraines lately because of lack of sleep, but generally, I’m okay. I understand that something’s got to give.”