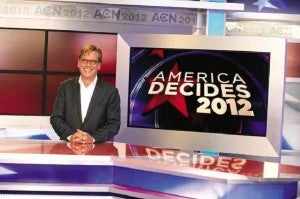 LOS ANGELES – “There are days when the stars of the show are the highest paid extras in Hollywood,” quipped Aaron Sorkin, Oscar- and Golden Globe-winning writer of “The Social Network,” as he gave a tour of the set of his acclaimed TV drama series, “The Newsroom.” Richard Hoover’s set in Los Angeles’ Sunset Gower Studios features a lot of glass, as per the specifications of Aaron, who created and writes the show, which weaves actual past news events or stories as covered by a fictional cable news program, “News Night.”

“There’s a lot of glass and the reason for that is that I write basically radio plays,” explained the creator of the award-winning series, “The West Wing.” But what thought-provoking, absorbing and entertaining “radio plays” they are on TV journalism. This riveting behind-the-scenes look at the folks who deliver a news show just earned three Emmy Award nominations in the drama series category, including Best Actor (Jeff Daniels, who stars as news anchor Will McAvoy) and Best Guest Actress (Jane Fonda, as Leona Lansing, owner of the cable news station that airs “News Night”). The brilliant Emily Mortimer costars as executive producer Mackenzie McHale.

Aaron, as smart and engrossing in person as his scripts, said, “It’s just talking from start to finish. There’s got to be something visually interesting going on. So we want to be able to put a camera in Will’s office to shoot a scene there and still see the visual action out here, all the way into the control room. We’ll need John Gallagher, Alison Pill, Olivia Munn or Sam Waterston standing out here all day long because of the scene that’s going in there.”

Laughing, he cracked, “Dev Patel is the best at it. His performances when he’s in a scene are extraordinary. When he’s not in the main scene, they’re even better.”

(Season two of “The Newsroom” premieres in the Philippines and Asia on HBO and HBO HD on Aug. 5 at 9 p.m.)

What made you decide to cast Emily Mortimer?

I’m crazy about Emily. It was a tightly fought contest between Emily and a couple of other actresses to get the part. Emily came in and read for us five or six times. She has so much that an actor can’t fake, [like being] smart and funny. She has those things and much more.

Emily had been working hard on a standard, nonregional American dialect. She had been working with a dialect coach all through the audition process. At one point during rehearsal, I just stopped her and said, “Use your own voice and let’s see what happens.” Suddenly, she was completely free to do and be all the things you cast Emily Mortimer to do.

So you are very much involved in the choice of actors.

Where do you get your news?

I get two newspapers thrown at my house in the morning so I read those—The New York Times and the Los Angeles Times. I also look at The Wall Street Journal. Then there are a couple of online sites that I like looking at. In my office, just out of habit, the TV will always be on CNN with the sound off.

Which online sites do you read?

I look at The Huffington Post, The Daily Caller—which is a conservative site—[and] Politico. Those are sites I probably wouldn’t be looking at if I weren’t doing this show.

What do you think is the influence of a show like “The Newsroom” on its viewers?

I wasn’t going for changing somebody’s media or news diet. This is a workplace drama. No different fundamentally from a show that takes place in a police precinct, an emergency room or a law firm. It’s just a different kind of work that they’re doing.

The other difference is that “The Newsroom” is a historical drama. Any news story we do is a real news story. We do it, first of all, to give it a sense of authenticity so you feel like this is taking place in the real world.

Your enthusiasm for the show is very contagious. Has the show become an all-consuming project for you?

It’s my pleasure for the show to be all-consuming. I create the show so that I can write every week. It’s a cliché but the people I work with become like a family. It’s a very intense thing. The first thing I do is I find people like Alan (Poul, director and executive producer) for whom the show is also all-consuming, who are as intense about the show as I am. Most important, they are the very best at it.

What else are you working on?

I am beginning to write my next movie on Steve Jobs (the untitled film is based on Walter Isaacson’s biography of the late Apple Inc. cofounder) and the play on the trial of the Chicago Seven—Abbie Hoffman, Tom Hayden and those [other] guys–[linked to] the 1968 riots in Chicago.

(E-mail the columnist at [email protected] Follow him at http://twitter.com/