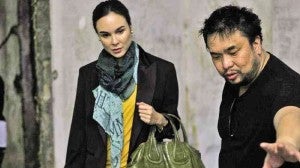 LOS ANGELES—It will be “bittersweet” for Christopher Ad. Castillo on the opening night of his Cinemalaya Philippine Independent Film Festival entry, “The Diplomat Hotel,” on Wednesday, July 31, 9 p.m. at the CCP.

Christopher had hoped to direct his father, Celso Ad. Castillo, in the horror-mystery, but the noted Filipino director passed away last year before shooting began.

“The Diplomat Hotel,” which Christopher dedicates to his dad, stars Gretchen Barretto, Arthur Acuña, Mon Confiado and Joel Torre. The following are the young filmmaker’s own words—deeply personal, intimate musings on his father, the genesis of his film and its making:

When I decided to join Cinemalaya, part of the reason was to be able to work with my father on a project whose genesis came because he took me to the Diplomat Hotel in Baguio decades ago.

He never found out that “The Diplomat Hotel” made it. I will never get a chance to direct him or know what he thinks of me as a filmmaker.

I understand that part of the attraction to the film is because I am his son, and that his rich legacy rests on me. But, I would give all this up to have him back.

The film’s philosophical core is the idea that, what if the legends of monsters and creatures were not real but only stories told and passed along through several generations. But, what if they became real, because we kept talking about them?

That is the whole premise behind Veronica Lansang, who’s played by Gretchen Barretto. Veronica has heard the stories and, as the night wears on, she can’t believe what’s happening around her, so she tries to make sense of it by formulating a reality in her mind.

The horror is really about what’s on the other side, and what’s in the past. It’s about a coming situation that can engulf them all. A voice from the past can cause so much damage in the now. That’s the type of horror I’m playing with here.

So, there are no cheap scares. People interest me, as well as the dark thoughts inside their minds. And when that imagination grabs a hold of you, it will tell you what is reality and what isn’t. By the time you differentiate it, it’s too late. You have no control.

When people found out that Gretchen was my lead, all of them said that if I get through her, then I can do anything.

I could sense that Gretchen was initially a little wary of me, but that’s understandable—she was sizing me up. Trust is not given—and, in filmmaking, trust is the key. So, I shot this difficult scene with her with the camera going up and down from floor to ceiling several times, then I showed it to her. And with that shot, I gained her trust.

If Gretchen had that diva reputation, she didn’t show it on set. She’s just a person who wants to work hard and demands the same from everyone. That’s a fair demand.

I expected a lot from the people involved in the film, so I expect a lot from it. We’re now the country for genre films, and that is what elevated Korean cinema into international prominence. Most of their successful films internationally did not deal with hometown class and societal issues, but with monsters, crooks and guns.

Same goes for my film—it’s commercial and fun in a dark and bloody way. I’ve always believed that art and commerce can exist together. My father’s films are prime examples.

I am my father’s son, but I’m also independent of him. But, when it comes to art and the box office, I want to emulate him. I want my films to make money.

I have two projects in the pipeline: A horror action film titled “The Boy Scouts,” and a gritty action movie titled “1000 Bullets,” starring Mon Confiado. Everyone tells me that the action genre is dead—but it’s time for a revival! Give me a gun, some terror, and a dramatic premise—and I’m off and running!