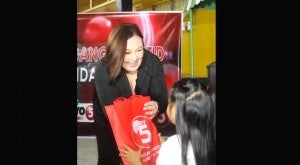 As part of Sharon Cuneta’s barangay immersion in preparation for her role as barangay chairman in her first teleserye “Madam Chairman,” she gave away school kits to children courtesy of TV5’s Alagang Kapatid Foundation.

Sharon Cuneta, “Kapatid Megastar,” visited the barangay (village) hall of Barangay Doña Imelda in Quezon City on July 17 as part of her preparation for her upcoming primetime series “Madam Chairman.”

Cuneta will play the role of a barangay chairman in her first teleserye ever. The prime-time series “Madam Chairman” will be directed by Joel Lamangan.

The actress sat through a barangay meeting and met real-life kapitana Connie Malangen and the team of barangay kagawad. They briefed Cuneta on the daily duties and responsibilities of a community leader.

After her immersion, Cuneta had a storytelling session with 100 public school elementary students from the barangay.

The children also received school kits and a hearty serving of soup and snacks courtesy of TV5’s Alagang Kapatid Foundation.