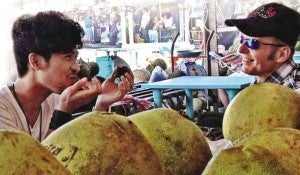 JAZZ and Theo gave their full trust to the filmmaker in shooting the docu “Jazz in Love.” INQSnap this page to view more stills.

For the first time in its nine-year history, a documentary, Baby Ruth Villarama-Gutierrez’s “Jazz in Love,” will open the Cinemalaya Philippine Independent Film Festival on July 26 at the Cultural Center of the Philippines.

It’s a fitting homecoming for the docu, which was part of the fest’s 2012 Manila Film Financing Forum, where it received the Regal Prize (which comes with P25,000) from producer Lily Monteverde.

“I’m happy and humbled that docus are now being allowed to shine,” she told the Inquirer. “But I’m nervous, too.”

The significance of a docu opening the annual fest is not lost on the filmmaker. “It lights another candle of hope on how we share Filipino stories.”

For a docu “to open a festival that mainly features fiction films” somehow bridges the gap, “unifying two cinematic forms.”

She considers this development a “celebration of Filipino documentarians like Nick Deocampo, Ditsi Carolino, Kidlat Tahimik, and Kiri and Sari Dalena, among others.”

Although not as popular as fiction films, docus are slowly but surely making waves at the Cinemalaya. Last year, among the most talked-about premieres in the fest were docus: Benito Bautista’s “Harana,” Michael Collins and Marty Syjuco’s “Give Up Tomorrow” and Lyca Benitez-Brown’s “Dance of My Life.”

“These films are not the weekly docus we see on TV and yet they are some of the best… I hope this world premiere will open the minds of viewers … to look at things differently from now on,” she said.

Gutierrez, who worked in ABS-CBN News and Current Affairs for six years, admitted that she herself had “to learn and unlearn” not a few things when she started work on “Jazz in Love,” which was a product of the French-German-Filipino documentary workshop spearheaded by the Goethe-Institut, the Film Development Council of the Philippines, the Philippine Independent Filmmakers Multi-Purpose Cooperative and other agencies.

“Jazz in Love” tells the story of a gay Filipino (Jazz) who enrolls in Deutsch language classes in order to marry his German boyfriend (Theo).

Gutierrez stumbled on the story by sheer good fortune.

“I found myself attending a three-month Deutsch class for immersion, upon the suggestion of Teddy Co, one of the Goethe workshop’s monitoring heads. That was where I met Jazz and other Filipinos who were there to embrace a new language in the name of love, marriage and a foreign visa,” recounted Gutierrez, who was producer of Yam Laranas’ docu “Asia’s Titanic” (aired on the National Geographic Channel in 2009).

Jazz’s story emerged “from more than 100 hours of footage shot over several months of research work,” she said. “I followed 18 people and became close to Jazz and his friends.”

It was not easy being trailed by a film crew for over a year, but Jazz and his German boyfriend Theo eventually gave their complete trust to Gutierrez.

The docu is “designed as a chronicle of Jazz’s journey to the altar and serves as a video diary of his impending migration to Europe.”

“We want to celebrate this kind of love,” she said. “It’s important to tell Jazz’s story in light of the prevailing hypocrisy in society. More than a love story between two people, it’s also a love story between a Filipino and his country—where migration has become rampant.”

Gutierrez pointed out that “an average of 350 Filipinos depart the country daily as partners of foreign nationals … that’s an estimated 127,750 Filipinos annually.”

The docu is Gutierrez’s modest contribution to the ongoing discourse on the issue of “love and leaving.”