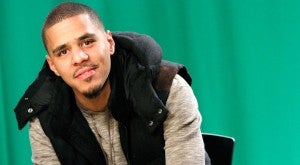 In this Jan. 27, 2012 photo, rapper J. Cole poses for a portrait in New York. Cole is apologizing to those with autism and their families for an offensive lyric. Cole says in a blog post Sunday, July 21, 2013 that he doesn’t agree with the recent trend of pressure rappers have faced to apologize when they step over a perceived line, but in this case he feels he went too far in a verse he contributed to Drake’s “Jodeci Freestyle.” AP

SAN DIEGO — Rapper J. Cole is apologizing to those with autism and their families for an offensive lyric.

Cole says in a blog post Sunday that he doesn’t agree with the recent trend of rappers facing pressure to apologize when they step over a perceived line, but in this case he feels he went too far in a verse he contributed to Drake’s “Jodeci Freestyle.”

“To the parents who are fighting through the frustrations that must come with raising a child with severe autism, finding strength and patience that they never knew they had; to the college student with Asperger’s syndrome; to all those overcoming autism,” Cole wrote. “You deserve medals, not disrespect. I hope you accept my sincere apology.”

Rap has a long history of often intentional offensive lyrics, but special interest groups have successfully used social media to elicit apologies recently after pressuring the companies who partner with them.

Lil Wayne and PepsiCo decided to part ways after the rapper offended the family of civil rights figure Emmett Till. Wayne stopped short of an apology to Till’s family privately in a letter but expressed regret for the lyric. And Rick Ross and Reebok split after the rapper issued a verse about using a drug to clandestinely incapacitate a woman before having sex with her.

Cole has been in the spotlight after his recent album “Born Sinner” jockeyed with Kanye West’s “Yeezus” when released last month and reached No. 1 on the Billboard 200 the following week. That album also contains moments that some might consider offensive. In Drake’s song, Cole raps that he’s “artistic” while his rivals are “autistic, retarded.”

Cole wrote that when he first heard a backlash from those who deal with the developmental disorder, he immediately realized he went too far.

“I was instantly embarrassed that I would be ignorant enough say something so hurtful,” Cole wrote. “What makes the crime worse is that I should have known better.”

Cole goes on to write that he’s inspired by those who reached out to him: “I have now read stories online from parents about their struggles and triumphs with raising an autistic child and I admire how incredibly strong you have to be to do so,” he wrote. “It’s touching. It also makes what I said even more embarrassing for me. I feel real shame.”

Read Next
No-sail zone on Lake Zurich for Tina Turner wedding
EDITORS' PICK
Palace: Malls, establishments may require customers to use of face shields
Syringes for Pfizer vaccine arriving on December 2 — NVOC chairperson
Smart offers wireless fiber-like speeds to Filipino homes with country’s first 5G Prepaid Home WiFi
Legarda: Ending Violence Against Women, a cause for all
This new condo in the South will make you want to turn a new leaf
Disease expert: Omicron variant may behave like Delta
MOST READ
Bongbong Marcos to face another disqualification case
Christine Bersola, Julius Babao cleared of cancer after colonoscopy, endoscopy
A Merry Bongbong
Isko Moreno ‘hopeful’ of getting Duterte’s backing as Bong Go withdraws
Don't miss out on the latest news and information.