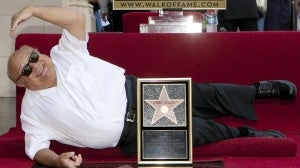 Actor Danny DeVito poses at a ceremony honoring him with a star on the Hollywood Walk of Fame, Thursday, Aug. 18, 2011, in Los Angeles. DeVito is known for his TV role as Louie De Palma in the 70s-80s series "Taxi," and his most recent role as Frank Reynolds in the FX series, "It's Always Sunny in Philadelphia." AP

LOS ANGELES—Danny DeVito has received a star on the Hollywood Walk of Fame.

The 66-year-old Emmy-winning actor was honored Thursday with star number 2,445 on the famous walkway.

The ceremony was held in connection with the Sept. 13 release of the DVD of the sixth season of the FX comedy “It’s Always Sunny in Philadelphia” in which DeVito stars as the ne’er-do-well owner of a Philadelphia bar.

DeVito played the role of caustic dispatcher Louie De Palma on “Taxi” in the late ’70s and early ’80s.

His film credits include “Batman Returns” and “Romancing the Stone.” He also directed several films, including “Throw Momma from the Train” and “Hoffa.”