Getting out of her comfort zone 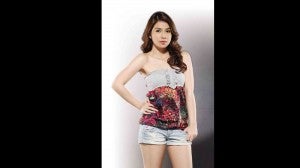 Usually cast as the girl next door, the trustworthy best friend, and later on in her career, the doting mother, Kaye Abad didn’t really need to break out of her real-life persona to portray such roles. But in an attempt to show range and versatility as an actress, Kaye made a stab at being a contravida in the ongoing remake of the 1980s soap “Annaliza” on ABS-CBN.

The experience, Kaye said, couldn’t be any more different, and difficult, from what she used to do—like doing a different job altogether.

“I’m starting to feel that I’m actually working now!” she said during a recent set visit at the Siena College of San Jose in San Jose del Monte, Bulacan.

“I have no problems doing crying scenes at all, but being contravida is very difficult; it’s taxing and draining. Being angry and shouting all the time takes so much of your energy,” said the typically soft-spoken and mild-mannered actress, who plays Stella, the abusive stepmother of Annaliza.

And to make things just a tad trickier, Kaye, at 31, still looks young for her age, which can be a disadvantage at times. “The way you look usually determines the kind of roles you get. I have droopy eyes, so I really need to exert more effort to look intimidating. Hindi ako kagaya ng iba na isang tingin pa lang, alam mong maldita na,” she said.

Kaye admits she gets a little irritated when she sees herself, all loud and crass, on TV. “Naiingayan ako sa sarili ko. And sometimes my character’s sarcasm rubs off me,” Kaye said.

However, what she loves most about doing the drama series, Kaye said, was being with all the exuberant kids on the set, especially the lead star, Andrea Brillantes.

Though she still prefers doing good-natured roles, Kaye feels more than grateful to be given the chance to show what else she’s capable of doing. “I’ve gotten so used to being kind and loving… It’s good to get out of your comfort zone once in a while,” explained the former teen star.

Back when she was just 18, Kaye thought that she would be done with acting by 25 to start her own family. But years have passed since her 25th birthday, and she still doesn’t feel ready to settle down, despite her current boyfriend and “The Voice of the Philippines” contestant Guji Lorenzana being “husband material.”

“I don’t have plans of getting married right now. I want to enjoy and focus on work. I don’t want to waste the opportunities coming my way. I need to save up first because life is hard nowadays,” she said.

Kaye also revealed that her former boyfriend Chito Miranda of rock band Parokya ni Edgar, with whom she had a relationship for seven years, was ready to tie the knot with her. “Ako na lang talaga hinihintay, but I just wasn’t ready,” Kaye recalled.

Asked what could possibly convince her to settle down, she quipped, laughing, “A big rock! Seriously, I would say stability. Having enough is never enough these days.”

Read Next
Advice for the angry
EDITORS' PICK
EuroMillions Superdraw: A lottery draw unlike any other is coming to the Philippines
‘Justice will be done,’ Duterte assures as he vowed probe on Jolo incident to bare ‘truth’
Water remains our saving grace right now
Smart releases Hyun Bin’s second TVC
Current dominant strain of COVID-19 more infectious than original—study
DOLE: Return of OFWs’ remains from Saudi to be ‘delayed,’ deadline moved to ‘early next week’
MOST READ
Locsin warns of ‘severest response’ if China’s army drills in SCS ‘spill over’ to PH domain
BREAKING: Duterte signs anti-terror bill into law
Duterte tells military: No other president looked at you the way I did
INQ animated bar graph: How severe is COVID-19 in Southeast Asia
Don't miss out on the latest news and information.