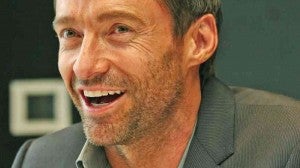 JACKMAN. “I’m quite patient—but, when I get angry, it’s not pretty.” RUBEN NEPALES

LOS ANGELES—Despite the success of “Les Miserables,” Hugh Jackman is struggling to turn his dream project for years into a reality: a new film adaptation of the classic musical, “Carousel.”

“Yeah, I’d love to do that,” Hugh said of doing a movie of the beloved Rodgers and Hammerstein musical that debuted in 1945 and a film version released in 1956. “That’s the one I’m fighting for. I still have to convince the people who pay for it.” As early as 2006, Hugh was reported to be planning to produce and star in the role of Billy Bigelow. Anne Hathaway was buzzed as the one Hugh wanted to play Julie Jordan.

In this interview, Hugh maintained that his passion project is still a no-go “but I think there’s more momentum for it. I’m keeping my fingers crossed that the film can still happen before I’m too old to play it (Bigelow).”

In the meantime, Hugh is back as the razor-clawed mutant in James Mangold’s “The Wolverine.” With majority of the latest installment of the mutant hero franchise shot in Japan, the cast includes key talents from that country. In her audition with Hugh, Tao Okamoto, a top model who’s making her film debut in the role of Mariko Yashida, ended up kissing the Australian star. “Please don’t tell my wife that,” Hugh joked when asked about the off-screen smooch. “It was in the script.”

He explained, “Both James and I said that I needed to come in for the auditions. We auditioned with quite a number of people. Tao naturally has the quality of Mariko, who’s very beautiful and has a very mysterious, enigmatic quality. But, she hadn’t been in a film, so she was nervous. Her English wasn’t bad. But, when she was reading the original script with me, her English seemed worse, so I just thought, forget the script, let’s just talk and keep the scene. At first, I could see her eyes were like, ‘Are we allowed to do this?’ Then, it sort of opened her up. She went along with it.

“Both James and I knew immediately that she was going to be perfect for the part. The fact that nobody, not even Japanese audiences, has seen her in a film—that’s going to be a real bonus.” But, how did the kissing come about? “I artfully neglected that in my answer,” he cracked.

On Bryan Singer’s “X-Men: Days of Future Past,” where Hugh will also be back as Logan/Wolverine, he said, “There are some nice touches in it, and the way it parlays into days of future past is very clever.”

He added, “The first month of the film was like a great reunion with all those great actors—Halle Berry, Patrick Stewart, Ian McKellen, Anna Paquin, Ellen Page, Peter Dinklage and Omar Sy. It was unbelievable! Then, we go back to the past when it’s James McAvoy, Michael Fassbender and Jennifer Lawrence. Every day is amazing.”

On what toll his fluctuating weight from film to film (sometimes, he goes to extremes—from emaciated to buff—in one film, as he did in “Les Miz”) does on his body, Hugh answered, “I’m asking that question, too. On some level, I’m training. I’m fit and healthy, but the losing and gaining weight rapidly is probably not very good. My friend, who’s a doctor, said, ‘You need to get checkups regularly if you’re going to change weight often like that.’”

Does one of Hollywood’s nicest guys ever bare his claws? Hugh replied, “Maybe this (Wolverine character) helps me. It’s good therapy.” He explained, “It’s little things with me. I’m actually quite patient, but when I do get angry, it’s not pretty.”

Hugh shares the Mr. Nice title with Tom Hanks. “He can have it,” Hugh quipped. Speaking of nice, he shared an anecdote about Hiroyuki Sanada, who plays Shingen Yashida.

He shared, “At the end of the day, I saw them—there were about 200 Japanese extras. I saw them lining up as they were leaving. I didn’t know what was going on. So I went. Around the corner, hiding, so no one else could see him, was Hiro. He was shaking the hand of every extra, thanking them and bowing to them for their work. That was another whole level of respect and humility!”

Asked for an update on his adopted daughter, Ava, the dad said, “She loves taking me to get a mani-pedi. What is it about daughters loving to see their fathers getting a mani-pedi? She loves to dance.”

“Ava’s very much like her mom—she’s full of bliss and joy,” he added. “She loves life!” Just like her father, too.