When stars cavort about in the buff 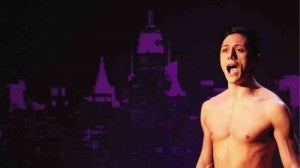 Mae West once said, “If you got the personality, you don’t need the nudity.” But, even the legendary sex symbol was well aware of the crowd-drawing appeal of sex and nudity at the box office. In fact, her first starring role on Broadway was in the steamy and decidedly unabashed 1926 play, “Sex,” which she herself wrote and directed.

Many decades later, nudity is still much-buzzed-about, especially in productions like “The Blue Room” (with Nicole Kidman), “Spring Awakening” (Lea Michele), “The Graduate” (Kathleen Turner), and “The Full Monty”—which drew a lot of attention not only for their thematic pertinence, but also for scenes that required actors to engage in “functional” nudity! (Interestingly, nudity among actresses doesn’t cause as much of a ruckus as when their male counterparts engage in it.)

The subject of nudity is a major hurdle for actors—because it’s never easy for anybody to take his clothes off in public, even “for the sake of art.” On a film set, the setting can be controlled—but, onstage, during a live performance, anything can happen! Nudity makes both the actors and their audience uncomfortable. There’s always a hint of malice that comes with it.

No scarcity of nudity

There’s been no scarcity of naked bodies on the West End stage, even those involving stars like Michael Ball (“Passion”), Ian McKellen (“King Lear”), Joseph Fiennes (“Troilus and Cressida”), and Adam Garcia (“Birdy”).

Their American counterparts more coy about being seen in the buff—but, the “braver” thespians on Broadway and off include Edie Falco and Stanley Tucci (“Frankie and Johnny in the Clair de Lune”), Jonny Orsini (“The Nance”), Benjamin Walker (“Cat On A Hot Tin Roof”), Johnny Galecki (“The Little Dog Laughed”), and Fiona Shaw (“The Testament of Mary”).

Daniel Radcliffe didn’t need a magic wand to justify his decision to do the full monty in the recent hit revival of “Equus”—the novelty of his full-frontal “exposure and disclosure” was soon replaced by the general observation that, in terms of dramatic chops, he didn’t have a lot of, uh, shortcomings to worry about—and his risk-taking paid off beautifully! For serious actors, getting naked is sometimes a “necessary evil”!

When Nicole Kidman appeared in the 1998 production of “The Blue Room” at the Donmar, audience members were searched for cameras.

This issue was likewise a pesky logistical dilemma for the recent production of Truman Capote’s “Breakfast at Tiffany’s”—because many viewers attempted to take photos of “Game of Throne’s” Emilia Clarke naked, during her bathtub scene with costar Cory Michael Smith!

Rupert Everett, who portrayed Oscar Wilde in “Judas Kiss,” observed: “In the old days, nudity used to throw an uneasy frost across an auditorium.” Not anymore—as proven by the raucous musical-comedy revue, “Naked Boys Singing,” which became the second-longest running musical in off-Broadway history (after “The Fantasticks”) when it ended its 12-year run early last year.

Last summer, we caught its spirited revival at the Kirk Theatre, with six attractive actors singing, swinging and shaking to hum-worthy, choreographed tunes that tackle themes that are alternately silly (“Gratuitous Nudity”), suggestive (“Muscle Addiction”) and serious: Seph Stanek’s “Window to Window,” about lust and lonely longing, is bittersweet in its ruminative simplicity.

The novelty of watching singing and dancing men in the buff wears off fast, however. To enjoy “Naked Boys Singing’s” frothy humor, you have to watch it with an open mind—and with tongue firmly in cheek (no pun intended).

Just the same, as the enthusiastic actors demonstrate their high-kicking, booty-shaking vaudevillian swagger, you can’t help but realize why some parts of the human anatomy ought to remain concealed and, well, “controlled” by a garment!