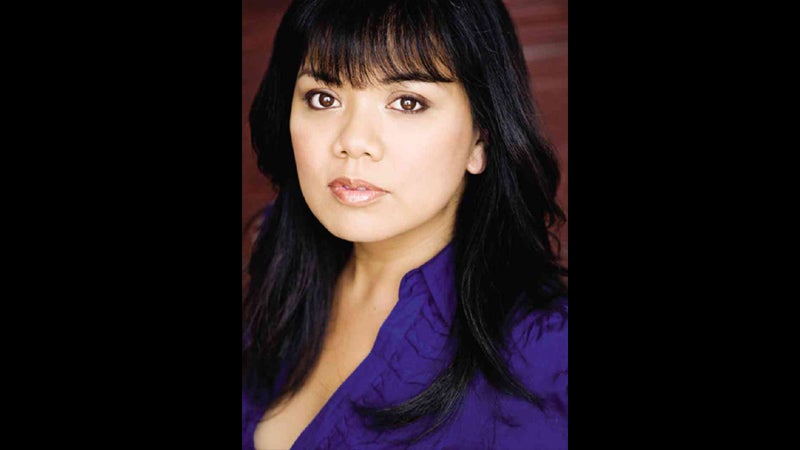 “Part of me hopes this is not the end, but just the beginning,” said Melody Butiu, who plays Estrella Cumpas, Imelda’s nanny, of the show’s closing on July 28. “There is a lot of talk about the show’s future life; I’m keeping my fingers crossed and waiting patiently.”

Like the rest of the cast, Melody earned critics’ hosannas in “Here Lies Love,” which was extended four times at The Public Theater. The New York Times’ Ben Brantley, who praised Melody’s rich voice in his review of the show, wrote in a joint piece with fellow critic Charles Isherwood that she should have been nominated for best featured actress in a musical in the last Tony Awards.

The actress is the sister of John Butiu, a visual development artist at Sony Pictures Animation (“Cloudy with a Chance of Meatballs 2” and “The Smurfs 2”) and one of the talents featured in my book, “My Filipino Connection: The Philippines in Hollywood.” Below are excerpts of my e-mail interview with Melody:

What are your thoughts as “Here Lies Love” goes on its final two weeks?

I’m incredibly grateful for this journey. I took a big leap of faith, flying out here (New York) to audition, and I’m so glad that I did. This has been an opportunity I will never forget. I’ve made incredible friends. I’m so blessed to work with all of these amazing artists. I know this run is winding down, so I’m just trying to relish every moment and every chance we get to share this story.

For this show, you received some of the best reviews in your career.

When I first read the description of the role of Estrella Cumpas, I just felt [this] connection. Her songs fit my voice and sensibility really well. This is my first show in New York, so when Ben Brantley of New York Times said I should have been nominated for a Tony Award, I was very flattered.

I’ve had the opportunity to work on some wonderful shows, including the world premieres of several plays. I [give] my all to each project. I’ve had plenty of triumphant, celebrated reviews, but also a few that… kind of hurt. That’s part of this business. I don’t rely too heavily on reviews as an assessment of my work. We have to be willing to fall in order to fly. Some people will love our choices; others may not.

Of course, it’s fun when a show is critically acclaimed and warmly received, as “Here Lies Love” has been. I continue to  make new discoveries on stage. That’s what’s so special about theater. Every night is an opportunity to share the story with a new audience.

What are the highlights that you will treasure from this experience?

Before we had our first audience, our director, Alex Timbers, sat us down and reminded us that The Public Theater is home to groundbreaking, history-making theatrical debuts, including “Hair,” “A Chorus Line,” “The Normal Heart.” He said a whole generation of theatergoers would soon walk into this space and say, “This is where they did ‘Here Lies Love’ for the first time.”

Recording the original cast album  was an incredible experience. This is my very first official cast recording, and I’m thrilled. We had a lot to do in a very short time, but we had a blast. I’m excited to hear how it turns out.

What were the amusing sidelights?

David Byrne was so gracious and dedicated to our cast, that every night during tech and previews, he would sit in our green room and make salabat (hot ginger tea) for us. It was such a sight, this rock-and-roll hall-of-famer and legendary-genius grating ginger and preparing salabat!

Every once in a while we met Broadway stars, including Patti LuPone, Joel Grey, Judith Light, Anne Hathaway, Brian d’Arcy James and many others. When they come down to the green room, we try to take a cast photo, but we don’t have much by way of a backdrop, so our vending machines have been our backdrop. It started when Anna Wintour from Vogue Magazine visited. Someone called it our ghetto step-and-repeat, so now it’s a fun tradition.

Finally, I recently had a birthday. The cast and crew decorated my dressing room, brought sweets and sang for me. One of the cast members even dressed in a floral blue swimsuit to do a drag version of “Sugartime Baby”! This is the nicest, loveliest cast anyone could hope to work with.

Did you hear from Imelda Marcos’ family? Did you get to know more about Estrella Cumpas?

David Byrne did so much research for the show and had library resources for us to look into. I read a lot about Estrella Cumpas in Carmen Pedrosa’s biography, “The Rise and Fall of Imelda Marcos.” I learned about Estrella’s involvement with the Romualdez family early on, how she helped raise Imelda and her siblings and lived with them for many years. When Imelda discovered Estrella was talking to Ms. Pedrosa, she went to great lengths to make sure she would no longer talk to the press.

I have not heard directly from Imelda Marcos’ family. We’ve been told that some of her relatives have seen the show—also some of Ninoy Aquino’s.

What new insights did you gain as a Filipino-American doing a play inspired by the life and journey of a figure in Philippine politics and other key players in her time who changed the course of the country’s history?

I was very young when the People Power Revolution happened. I remember my family glued to the TV screen watching the news of Aquino’s assassination, and the events that followed, leading to the election of Corazon Aquino. My parents left the Philippines during Martial Law to start a new life. They left my Kuya John behind as an infant with my [grandparents] so they could settle down in the US first. I was 3 years old when I met my Kuya for the first time. I can’t imagine the sacrifices they made. I think of that when we tell this show’s story.

David Byrne told me that you were involved with “Here Lies Love” from as far back as 2005, when he met you. Can you talk about the evolution of the show from this perspective?

I auditioned for the show at the end of 2005. David was preparing a concert version of the piece for the Adelaide Festival in Australia, and I was cast as Estrella. He was still writing some of the songs with Fatboy Slim (Norman Cook) at the time, so I flew out to New York to sing on some of the demo recordings. The concert was set in spring of 2006, but I couldn’t join. When the concept album was released in 2010, I received a copy and a thank you in the liner notes. I was so excited to be even a small part of the process.

When word of a developing production at The Public Theater came out, I kept an eye out for it, and decided to audition again. The original concept album had a larger emphasis on the relationship between Imelda and Estrella. There’s a song about how Imelda’s mother, Remedios, promised that her children would take care of Estrella in her older years (“You’ll Be Taken Care Of”). There’s also a song about an encounter between the two women after Imelda was on her own (“How Are You?”). While Estrella is still a prominent figure in the story, the show has evolved to put more focus on Benigno Aquino and his political rivalry with the Marcoses, and the rise of the People Power Revolution.

David was open to letting the show become what it wanted to be. He and Alex Timbers created a fun, multimedia disco theatrical experience, but it’s also very political and moving. Ultimately, it’s about the resilience of people who demand to have their voices heard. People have told me that it has inspired them to learn more about Philippine history.

How “Filipino” is David Byrne by now?

David has treated this journey with so much respect and regard that he’s definitely an honorary Pinoy in my book! He knew so much more about Filipino history when we started than even I did, and he was still asking questions. We all felt free to give our input during the process. It’s funny when some Filipino-American audience members watch the show and say, “I didn’t know that. Did he make this up?” Parts of the show were “theatricalized” but I assure you David did his homework.

How do you plan to mark the last performance of “Here Lies Love”?

Probably with tears of joy and sadness. I’m a bit of a crier, so whether I’m really happy or sad, it’s time to bring on the waterworks!