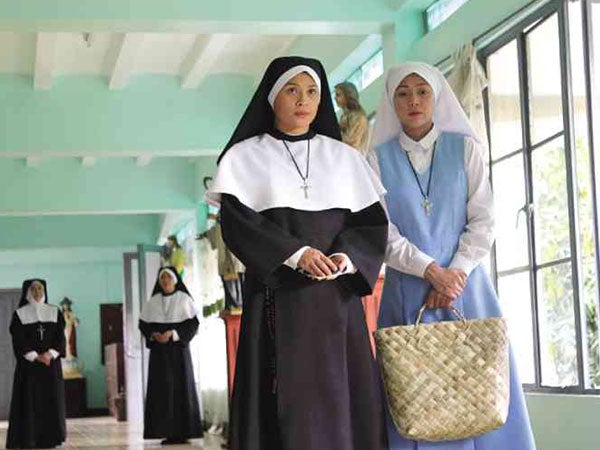 NEW YORK–It could very well have been called the New York Filipino Film Festival, since starting last week, a host of Filipino films has been screening across this city in a variety of venues.

Vince Sandoval’s film Aparisyon got a weeklong screening at the MoMA (Museum of Modern Art) as part of the organization’s ContemporAsian series. On Wednesday, the director attended the first day of screening and joined in a spirited Q-and-A about his film.

MoMA has described Aparisyon as “a stylistically and thematically unique film from the exciting Philippine cinema scene.” It will screen as the July selection for MoMA’s ContemporAsian series, a monthly exhibition of critically acclaimed contemporary Asian cinema.

When Sandoval was at the Busan International Film Festival in South Korea last October, he met up with Bono Olgado, the Director of the National Film Archives of the Philippines. Olgado had interned for MoMA while he was a student at NYU.

Olgado was flying to NYC from Busan to present the newlyrestored Filipino classic, “Genghis Khan,” at MoMA. He had also brought with him DVD copies of new Filipino films for MoMA to review and asked for a copy of Aparisyon.

“I hadn’t thought about it after that until I received an email a few weeks ago from MoMA inviting the film. In her email, MoMa curator Jytte Jensen said that they found Aparisyon to be a ‘reserved and beautiful film that stands out as distinct from other Filipino films we have seen and previously shown.’

“I was blown away by the news; MoMA is one of the most prestigious film venues in the world and it’s been a dream of mine to be able to present my own film there. It took a few days for the news to sink in,” Sandoval told the Asian Journal.

Aparisyon is Sandoval’s follow-up to his successful directorial debut Señorita. He said the film was inspired by the political events in the Philippines in 1986, leading up to the EDSA People Power Revolution, where everyone saw nuns marching the streets fearlessly, flowers in hand for the soldiers.

“How the Filipino nuns moved from a very conservative stance to a politicized and progressive one has always interested me, so Aparisyon is my fictional take on how that paradigm shift took place. Still, I’d say that Aparisyon is more a philosophical film than a political one,” he explained.

Sandoval and his team shot Aparisyon in eight days at a seminary in Binangonan, Rizal. He was in Manila for three months from pre-production through the editing and sound mixing process. The film screened at last year’s Cinemalaya, a delightful experience that he cherishes to this day.

“It is very gratifying that Cinephilia is thriving back home and with it an exciting film scene. I can confidently say that quite a number of independent Filipino films have now overtaken mainstream product in terms of technical craft, while indies have long left mainstream movies in the dust when it comes to vision and ambition,” he said.

Aparisyon resonated well with the viewers, and Sandoval said he is overwhelmed by all the positive reviews his film has received so far.

On Pinoy Rebyu (the Philippine counterpart to Rotten Tomatoes), Aparisyon is currently the #1 best-reviewed local release of 2013 as of early July and the only one rated “essential viewing.”

ClickTheCity (the Philippine version of Time Out New York) gave Aparisyon a rare 5 out of 5 stars, saying that it’s “easily one of the best films to have ever come out from the Cinemalaya film festival.”

Skilty Labastilla, an Ateneo professor and Young Critics Circle member, wrote, “If Señorita signaled [Sandoval’s] arrival as a filmmaker to watch, Aparisyon emphatically confirms his place as one of the vanguards of the new Philippine cinema.”

Through Aparisyon, Sandoval was able to work with big-named stars in the Philippine movie industry such as Jodi Santamaria, Mylene Dizon, Raquel Villavicencio, Fides Cuyugan-Asencio, among others.

“None of the cast members, considering their stature, had any airs,” Sandoval said. “Both Mylene and Tita Fides flew back to Manila a day before shooting, and they put up with the grueling hours of that first day despite their jet lag. Tita Raquel had also been a tremendous help in shaping the screenplay.”

For now, the director excitedly announced that he is working on his third film, which will be his English language feature debut. The working title is “Lingua Franca” and it is about a Filipina who teaches grade school English in Cagayan de Oro who ends up an undocumented worker in New York City. She witnesses a crime but cannot go to the authorities for fear of deportation.

“I believe that the history of New York City is fundamentally a history of immigration in the US. All the characters in the film, including the Polish American family that the Filipina works for, are or had been immigrants at some point or another, and I’m interested in exploring that dynamic in a domestic setting,” he said.

The NYAFF lined up Filipino movies under the festival’s special focus called “Manila Chronicles: the New Filipino Cinema.” “Once one of Asia’s most vibrant film industries, they’ve fallen off the film festival radar in recent years. Heck, it’s been almost 10 years since we’ve even shown a Filipino film,” the NYAFF website declared.

“But with the deaths in 2012 of many of the elder statesmen of Filipino cinema including Celso Ad Castillo, Mario O’Hara, and, in 2013, the acclaimed Eddie Romero, we thought it was time to catch up with this special focus on movies from first-time and underground filmmakers that specialize in time travelling drug dealers, out-of-control teen parties, and refrigerators that kill.”

True to its focus on new Filipino cinema, NYAFF featured upcoming directors, some of whom are presenting their directorial debuts.

Rico Maria Ilarde has been making distinctively Filipino horror movies since 1999 and his “The Refrigerator,” about a hell-spawned appliance, is the horror movie simultaneously subverted and celebrated. Kevin Dayrit’s “Catnip” and Gino M. Santos’s “The Animals” are offbeat, bruising, and often bloody portraits of adolescence. And Christian Linaban’s “Aberya” is described as stylish and occult debut feature unlike anything you’ve ever seen.

The most recognizable name in this year’s crop of Filipino films is Erik Matti. The festival screened his “ghetto superhero movie” “Gagamboy,” back in 2004, and his latest film, “On the Job,” was selected for the Cannes Director’s Fortnight this year. This year, NYAFF is showcasing his short film “Vesuvius” along with his feature called “Rigodon.”

“What emerges from our selection of Pinoy films is a cinema on fire, formed from fever dreams, pure sensation, and outrage that provides brisk, intelligent entertainment. But beyond the lively phantasmagoria, these films reveal a culture that has gone through the terrors of war, colonialism, and dictatorial rule, still aflame with conflict and contradictions. This line-up is a testament to the vibrancy and resilience of an industry that is possessed by the bold brilliance of a young generation of brand new filmmakers,” festival organizers said.

As the first and longest running film festival of its kind in the USA, the Asian American International Film Festival proudly celebrates its 36th edition this year. For over three decades, AAIFF has played a leading role to introduce important Asian American and Asian artists to New York audiences premiering works by filmmakers such as Cui Zi’en, Lav Diaz, Marilou Diaz-Abaya, Ann Hui, Michael Kang, Eric Khoo and Mira Nair, among others.

“Marking the 36th year, AAIFF’13 is proud to present the best most recent cinematic achievements by this class of emerging storytellers whose work will resonate for years to come,” says Asian CineVision Executive Director John C. Woo.

“I have not witnessed this amount of arising new talent ever in my years. Special thanks to curators La Frances Hui and L. Somi Roy for their world vision, their patience and guidance of the staff in creating the 2013 program.”

AAIFF, which will run from July 24th to August 3rd, is presenting 26 feature films and 44 short films, for, by and about Asians and Asian Americans, with works from or featuring characters from 18 countries including Australia, Canada, China, Hong Kong, India, Indonesia, Israel, Japan, Korea, Malaysia, Nepal, Pakistan, The Philippines, Singapore, Taiwan, Turkey, UK, and the USA.

With the themes of Asian American Achievements, Exploring Asian Filmscapes, LGBTQ spotlights, Taiwan Cinema Days and a tribute to Philippine filmmaker Marilou Diaz-Abaya (1955-2012) as well as other female filmmakers, the 36th Asian American International Film Festival aims at giving the audiences a comprehensive picture of the Asian and Asian American independent cinemas.

For this year, AAIFF is offering a few Filipino movies. “Harana” is a long-abandoned Filipino courtship serenade, which originated in the Spanish colonial period. In this award-winning documentary, guitarist Florante Aguilar returns to the Philippines from the US for the first time in twelve years to discover three of the last remaining harana masters: a farmer, a fisherman, and a tricycle driver.

“Harana” emotively weaves their performances to exemplify the past and present, the here and there, and the rural and urban. Then, there’s “Karnal,” directed by Marilou Diaz-Abaya.

A documentary about the late director is also in the lineup. Directed by her friend Mona Lisa Yuchengco, the documentary recounts the achievements of Diaz-Abaya (1955-2012), the “first lady” of Philippine cinema. Marilou made unflinching efforts to make films for the underclass, which struggled to survive harsh societal and political conditions.

Lastly, there’s “Requiem!” from director Loy Arcenas, which riffs off the Gianni Versace – Andrew Cunanan case from, literally, the other side. Ambitious local politician Swanie holds a wake for a distant relative who has become an instant celebrity after killing a famous American designer; all while her dressmaker-transgender son sacrifices her breast transplant money to help bury a neighbor.

For more details on screening times, visit the following sites – http://subwaycinema.com/nyaff13/ for NYAFF; for AAIFF – http://www.asiancinevision.org/aaiff/ and for MoMA’s ContemporAsian series – http://www.moma.org/visit/calendar/films/589