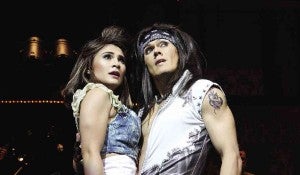 VINA Morales and MiG Ayesa in “Rock of Ages”

Stacee Jaxx, one of the main characters in the musical “Rock of Ages” is the type of rock star MiG Ayesa has always been afraid of becoming.

A rock god past his prime, Stacee, who is playing his last gig for the band Arsenal, is not the nicest person, says Ayesa, a Filipino-Australian.

Fame has gotten to Stacee’s head. He uses and abuses people. He is incredibly vain—the archetypal narcissistic rock star.

“A spoiled brat, he lives in his own world and has no sense of reality. Stacee leaves his band to go solo, thinking that everything is all about him. And then he unravels. I never want that to happen to me,” Ayesa tells the Inquirer.

“Rock of Ages,” set in the 1980s, features the music of Bon Jovi, Poison, Journey, Styx and other prominent bands of that era. The lighthearted, “self-deprecating” production debuted on Broadway in 2009. It went on its first national tour of the United States the next year, with Ayesa initially playing the role of Stacee.

Ayesa says Stacee’s flaws make playing the role such a blast because he gets to do things he will not get away with in real life. He can play the bad boy onstage and be his usual self afterwards. Basically, Ayesa jokes, “I don’t have to pay the price for being a jerk.”

But at times, he gets so much into Stacee’s character, that he goes out of control. In an earlier US show, for instance, Ayesa grabbed an unsuspecting woman’s face and licked it. The lady was stunned, needless to say. But, eventually, she started laughing like the rest of the audience.

“I was shocked as well. Then I realized that Stacee would have totally done something like that,” says Ayesa, who got international exposure as a finalist in the 2005 reality talent search “Rock Star: INXS.”

Fresh from playing the lead role in the recently concluded 10th anniversary world tour of the musical “We Will Rock You,” Ayesa is in the country for a repeat of last year’s successful local staging of “Rock of Ages.”

What convinced you to do the show in the Philippines for the second time?

I’m used to doing long runs. Last year, we only did about four weekends. It was over just when I was starting to get into it.

How did you find the local cast?

They’re phenomenal. And they work hard. They never complain. They have fun and laugh a lot. Half the time I don’t know what they’re joking about, but I find it endearing.

What was your impression of the Filipino audience when you first performed here?

Music is like the second language of Filipinos! They all sang along with me.

How did you prepare for the role of Stacee?

I did a lot of research on 1980s rock stars; I watched concerts. I spend a lot of time without my shirt on in the show, so I also have to keep fit by training regularly.

Is Stacee inspired by any particular rock star?

My main inspiration is Axl Rose. But Stacee is an amalgam of many artists—Bon Jovi, David Lee Roth, Bret Michaels, Sebastian Bach… maybe a bit of Austin Powers.

Do you enjoy dressing up like a 1980s rock star?

I love the fashion; it’s crazy! Big hair, makeup, pants so tight you can barely move!

Do you make an effort to do something new in each show?

Every show is different… I enjoy it when little things go wrong, just to see how everyone will improvise. The audience easily detects fear. So, if you must make a mistake, make it bigger and make it work!

What’s to learn from Stacee?

We’re all human. We all fail and fall from grace. If you believe in your own hype, and that you will stay on top forever, then you’re mistaken. You have to keep working, you have to stay humble and grounded. Otherwise you’ll lose yourself and, ultimately, everything.

Read Next
Tuldok, July 16, 2013
EDITORS' PICK
Every Filipino home can now be a smart home with realme TechLife
PLDT Home Prepaid WiFi customers now under the care of Smart
Nestlé Philippines’ ‘NESCAFÉ Plan’ bags Grand Anvil at PRSP 56th Anvil Awards
Wesley So officially a US citizen
‘Pilgrim of peace’ Pope Francis heads to war-scarred Iraq
WHO: Arrival of vaccines in PH ‘a powerful step’ towards economic recovery, normalcy
MOST READ
Kris Aquino dispels rumors on son Josh getting married, thanks Ogie Diaz for defending him
Wesley So officially a US citizen
Ginebra trades Slaughter to NorthPort for Standhardinger
LTO’s P500-M deal for screws draws scrutiny
Don't miss out on the latest news and information.