Sexy ladies! So much for world peace 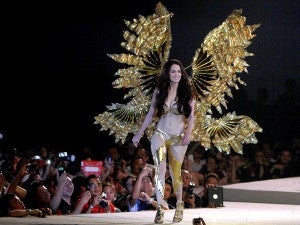 The 2013 FHM 100 Sexiest victory party held Wednesday at the World Trade Center in Pasay felt at times like a beauty pageant with the hopefuls parading in their national costumes—a Swiss milkmaid, Korean royalty, an American Indian … Then they disrobed, revealing flimsy, barely-there bikinis, and all hell broke loose. So much for world peace.

The show opened with scantily-clad models obviously out to fulfill myriad male fantasies— women in military uniforms or Japanese seifuku and kimonos. There were cowgirls, French maids, race-car drivers and baton-wielding policewomen. But it was the ones with nearly nothing on who sent the testosterone-heavy crowd to the edge.
A voluptuous model came out wearing only black thongs and tiny pasties on her ample busts. The men, necks craned, rose from their seats, and started hooting. As she walked down the lengthy catwalk, hordes of cameras, zooming in to who knew where, followed her every step of the way till she struck a pose at the end. 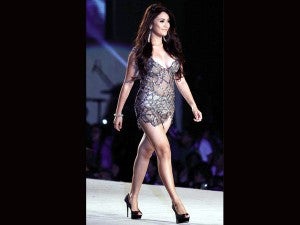 Aubrey Miles opened the main show, looking like a naughty queen in a red suit with matching cape. She made her entrance on a moving throne decked with palm leaves.
What followed was a series of well-choreographed dance numbers meant to titillate: Bangs Garcia in the Garden of Eden; Ryza Cenon and Meg Imperial in Aztec-inspired costumes; Glaiza de Castro as a sea goddess in a skimpy blue dress; Empress Schuck, who surprised not a few by landing in the Top 10, was the night’s snow queen.
Missing was a huge chunk of the Top 10—Angel Locsin, Jennylyn Mercado, Cristine Reyes, Solenn Heussaff, Ellen Adarna, Anne Curtis and this year’s bridesmaid, Sam Pinto, hailed FHM’s sexiest in 2011 and 2012.

But their absence didn’t mar the show, especially with hot moms Aubrey, Andrea del Rosario, Jana Victoria and Sheree showing everyone that they still had what it took. 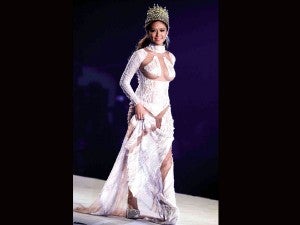 Brazilian bombshell Daiana Menezes briefly stole the scene when she showed off her trim waist in a bright pink two-piece, and drew cheers louder than stars far more famous than her did.

A flock of women in golden thongs and masks took over. Some wore conventional tops; the rest didn’t seem to have anything by way of concealment but long, wavy tresses. Their bodies, swathed in glitter, glistened as they walked, danced and tossed their hair about. Seductively, yes. 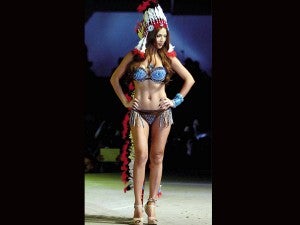 Then darkness, followed by a roaring clap of thunder. A female voice announced, “The sexiest and most beautiful woman in the land … Marian Rivera.” As the lights came back on, the woman everyone was itching to see emerged atop the stage, setting off a frenzy of clicking shutters and flashing bulbs.

Marian, who had graced the magazine’s cover for the first time last January, was in an all-gold outfit—a set of elaborate wings; strips of fabric snaking round her alabaster limbs.

With the stereos blasting Phoenix’s “Girlfriend,” Marian sauntered confidently—none of the hammy poses or antics of those who went before her. She smiled and gave a teasing smirk. That was more than enough to make the hot-blooded men in the crowd roar.

Her boyfriend, actor Dingdong Dantes must have been watching from somewhere, thinking, “That’s the closest you’ll ever get.”