Multilingual minions take over in ‘Despicable Me 2’ 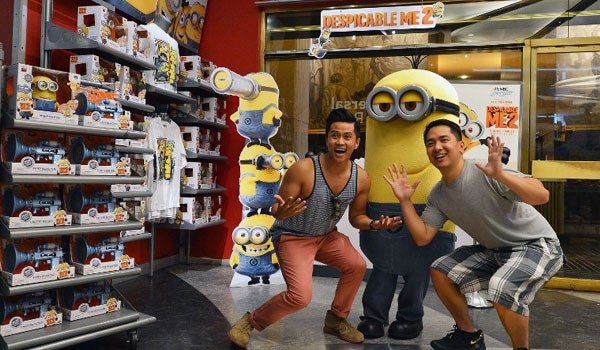 Fans pose for pictures at the Meet The Minions from ‘Despicable Me 2’ event at NBC Experience Store on June 28 in New York City. AFP

In fact the little yellow men — voiced by the films’ French directors with a merry sprinkling of multi-lingual gibberish — have proved so popular that they are to get their own movie next year.

For now they have to share the limelight with villain-turned-doting-father Gru (voiced by Steve Carell, also in a jumbled-up accent) in “Despicable Me 2,” out in the United States for the July 4 national holiday.

The first film three years ago, in which the dastardly Gru plotted to steal the moon but was won over by a trio of orphan girls in need of a father, made more than $540 million and became the 10th-biggest animated film in US history.

The follow-up is already out in parts of Europe as well as Australia and Hong Kong, and has opened strongly and with positive reviews, fueling its makers’ hopes for another blockbuster hit.

“While not quite as charming or unique as the original, (it) comes awfully close, extending co-directors Chris Renaud and Pierre Coffin’s delightfully silly sensibility to a bit larger universe,” said the Variety trade journal.

“This storyline also cleverly satisfies a second objective: devising an expanded role for the Minions without letting the little yellow scene-stealers completely abscond with the show,” it added.

The new film follows the now-goodie Gru as he is recruited by the Anti-Villain League (AVL) to use his former baddie skills to help deal with a powerful new super-criminal.

He is supported by AVL agent Lucy Wilde, voiced by Kristen Wiig (“Saturday Night Live,” “Bridesmaids”), to hunt down the criminal who has stolen a top-secret transmutation serum.

The Minions, inevitably, get heavily involved in the story. They end up being given the serum, turning them from jolly yellow midgets to raging purple monsters who side with Mexican-themed villain El Macho.

The Minions are played by the French co-directors themselves, but only because they were having trouble finding the right voice.

“I used to do a lot of commercials and TV series and temped in my voice just for pacing reasons .. It’s just to show whoever is going to design the voice a way to go,” Coffin explained.

“So I did this voice in a couple of minutes, and when I asked Chris (Meledandri, head of co-producers Illumination Entertainment), to listen to it, he said: ‘Well, you’re going to be the voice of the Minions’.”

“So, these words pop out, and I have them speak Indian, French, English, Spanish and Italian. I mix up all these ridiculous sounding words just because they sound good, not because they necessarily mean something.”

The jabbering yellow army will get their own film next year: “The Minions” is set for release in December 2014, co-directed by Coffin and Kyle Balda, with a new super-villain called Scarlet Overkill, played by Sandra Bullock.

Accompanied by her inventor husband Herb (to be played by “Mad Men” star Jon Hamm), they hatch a plot to take over the world, according to the film’s IMDb movie database page.

Carell, asked about the Minions’ expanding role at a yellow-carpet screening of “Despicable Me 2” in Los Angeles before its release, acknowledged: “They are always upstaging me.”

But the comic actor, star of “The Office” and this year’s “The Incredible Burt Wonderstone,” added: “If I am going to be upstaged by someone, I am glad it’s them.”