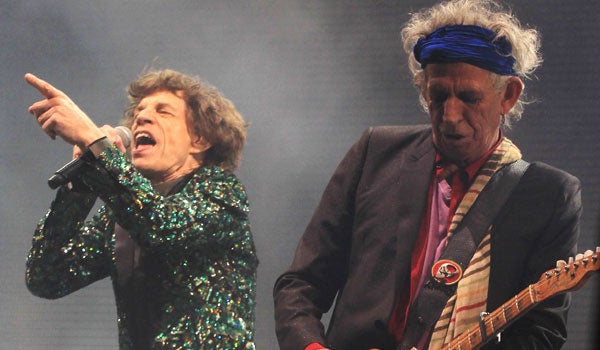 Mick Jagger and Keith Richards of The Rolling Stones perform at Glastonbury, England on Saturday, June 29, 2013. Thousands are to enjoy the three day festival that started on Friday, June 28, 2013 with headliners Arctic Monkeys, the Rolling Stones and Mumford and Sons. AP

PILTON, England — This could be the last time, as Mick Jagger once sang. For the Rolling Stones, it was definitely a first.

A majority of the 135,000 festival ticket-holders crammed into the fields in front of Glastonbury’s Pyramid Stage for the gig, which opened with a rousing “Jumpin’ Jack Flash.”

As on recent tour dates, the Stones gave fans a fistful of classic hits — including “It’s Only Rock ‘n’ Roll (But I Like It),” ”Paint it Black,” ”Wild Horses” and “Gimme Shelter” — as well as newer songs.

Jagger, who turns 70 in July, has lost none of his swagger, strutting the stage in a sequined green jacket.

In a pre-show BBC radio interview, Jagger gave no clue about whether the band he started with Keith Richards in 1962 will ever call it quits. He said, “I’ve no idea,” before telling an interviewer that he’d probably continue as long as he was wanted.

The band recently played a string of North American dates on its “50 and Counting” tour and is due to play two concerts in London’s Hyde Park next month.

The Stones turned down offers to play Glastonbury for years, but appeared to embrace the down-to-earth spirit of the festival, held on a farm in southwest England. On Saturday, Jagger tweeted a picture of himself outside a yurt, a Mongolian-style felt tent where he reportedly spent the night.

Guitarist Richards said the band was “destined to play Glastonbury.”

The Glastonbury Festival was founded by Michael Eavis in 1970 on his Worthy Farm near Pilton, 120 miles (193 kilometers) southwest of London. It is famous for its eclectic lineup — and the mud that overwhelms the site in rainy years.

Other performers on Saturday included Elvis Costello and Primal Scream. But for many festivalgoers, the Stones were the main event.

The three-day festival wraps up Sunday with a headlining set from Mumford & Sons.