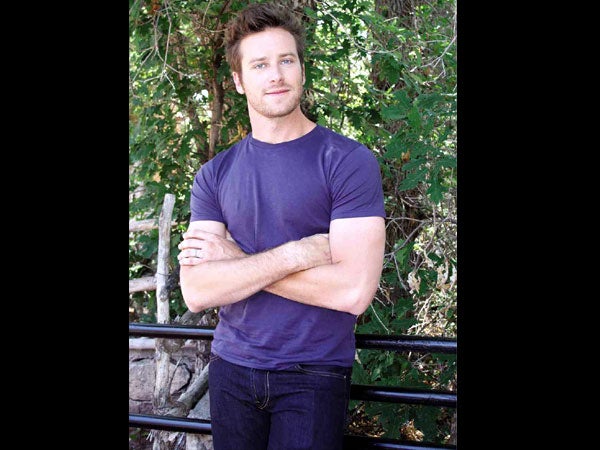 HAMMER. From “The Lone Ranger” to “The Man from U.N.C.L.E.” photo by ruben v. nepales

LOS ANGELES—If “Man of Steel” and “The Lone Ranger” work together, what do you get? “The Man from U.N.C.L.E.” Henry Cavill and Armie Hammer, two of the hottest Hollywood male stars today, are teaming up in Guy Ritchie’s movie version of the classic 1960s spy TV series that starred Robert Vaughn and David McCallum as evil-fighting agents.

“I would have loved to work with Tom, but at the same time, I’m also excited to do it with Henry, because it adds a different twist to the movie,” Armie said in a recent interview in Santa Fe, New Mexico.

At the time of our interview, Armie said he has not met Henry or David. “I’m excited about meeting both of them,” said the great grandson of the late oil tycoon and art collector, Armand Hammer. “Hopefully, I’ll get to meet David while making the movie. We start shooting in August.”

“I’m also very excited about playing a Russian,” Armie added. “I’m in the middle of my research phase now. I’m studying the political climate during the Cold War between the United States and the Soviet Union. It was a fascinating time globally. It’s such a great script (by Scott Z. Burns), and it’s so funny! Guy Ritchie has such a great take on it.”

In director Gore Verbinski’s very entertaining “The Lone Ranger,” Armie emerges as a full-fledged movie star. In a movie that taps his charisma and humor, the tall, beaming Armie is man of the law John Reid who becomes the masked title character. He’s a good match to Johnny’s Native American warrior, Tonto. It’s tough to share screen time with the always-appealing Johnny, but Armie holds his own against the screen icon.

According to Armie, it was just as tough to match the talents and charm of his other co-star, the dazzling white horse who plays his trusted Silver. “This movie wouldn’t have been possible without Bobby Lovgren, who trained all the horses,” Armie acknowledged. “Bobby has a way with horses that’s unlike anything I’ve seen.”

Armie shared an unusual thing that one of Bobby’s horses does. “Bobby was able to train a horse to walk up to a six-pack of beer, and drink the entire six-pack,” he said. (Later, Armie clarified that the six-pack contained water, not beer.)

Armie was also amazed at how Bobby trained his horses to hit their marks in a scene. “Bobby has a piece of wood with rubber on it. The director (Gore) will go, ‘I need the horse right over there.’ Bobby will just throw this piece of wood. He’ll just go, ‘Silver, get on your mark.’ The horse will go, clomp, clomp, clomp and put two feet right on that piece of wood—and hit it!”

Of Johnny’s recent 5-0 birthday milestone and career, Armie enthused, “Yeah, it’s incredible. If you go look at his IMDb page and look at all of his movie titles, each one of them is amazing! But, the most encouraging thing about it is that, through it all, he’s been able to stay normal. He walks in, knows everybody’s name, is super friendly, hits his marks, knows his lines—he’s a pro.”

Given Armie’s string of big breaks lately, he will likely become even busier in front of the cameras. That prospect has not deterred Armie and his wife, Elizabeth, from starting a business venture. “We opened a bakery in San Antonio (Texas) called Bird Bakery,” he revealed. “It’s a made-from-scratch patisserie. We use local ingredients—no preservatives, artificial ingredients, shortening. Just as healthy as you can get while eating baked sugar.”

The food subject led to a question about what was the strangest meat he has ever eaten. “I ate a turtle heart once,” he replied. Later, when we asked Armie if he has tasted “balut,” a delicacy in the Philippines, he said he knew it was an unhatched duck egg, but he probably couldn’t eat one.

Looking into the near future, Armie said he did not think of “The Lone Ranger” as his shot at a franchise while shooting the film and doing various stunts in New Mexico. “I tried not to think about it,” he said. “You look at the involved parties—Jerry Bruckheimer, Disney, Gore, Johnny. Obviously, none of them are strangers to franchises, so part of you wants to be optimistic.

“But, at the same time, it all depends on how the movie is received. If Gore, Johnny and Jerry come back, then yeah, I would definitely consider it. But, at the moment, I’m still too sore from the first one to even think about a franchise!”