Due in large part to the recent Oscar-nominated film starring Hugh Jackman and Anne Hathaway, as well as its nearly 28-year-long run in the West End, plus countless productions all around the world, “Les Misérables” is perhaps one of the most inspiring musicals ever produced. Its themes of love, redemption, second chances and forgiveness are universal, easily translatable into any language and playable in just about any city.

Following one of our “4 Stars concerts” in Tokyo (allow me to say to the Tokyo audiences, thank you very much—you were all so amazing!), I headed to the Imperial Theater to watch a performance of “Les Miz”… in Japanese. I figured that, because I’d done the show often enough, at no point would I find myself lost in translation.

Boy, was I ever right.

This is the same production currently preparing for a March 2014 return to Broadway. It has toured the United Kingdom and the United States with additional productions in Korea and Spain, and a June 2014 opening in Australia.

It’s also the production that opens this September in Toronto (starring Ramin Karimloo as Jean Valjean). It is directed by Laurence Connor and James Powell, themselves alumni of the original West End production. I had the pleasure of working with them both for the “25th Anniversary Concert” at the O2 Arena in October 2010.

I had actually seen this version when it made its final stop at the Barbican Theater in London, so I knew exactly what to expect as far as the sets and production elements. What I did not see coming was the power possessed by the cast of actors and singers performing that evening.

(“Les Miz,” like many other shows running in Japan, is double, triple, or in some cases quadruple cast, with actors doing the show in regular rotation because there are so many performances in one week.) 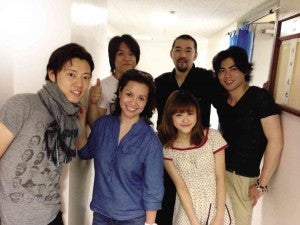 It was easy to recognize the characters once they appeared: Valjean with his almost animalistic growl and close-cropped haircut (very similar to Hugh Jackman’s in the opening scenes of the movie)… Javert with his booming baritone and authoritative posture… Fantine with the sad look in her eyes… Eponine’s heart on her sleeve… the Thénardiers as cunning, scheming and clever as always… the lovers Marius and Cosette with a regal air… the urchin Gavroche, always with a twinkle in his eye… and the passionate, strong Enjolras leading the students.

To say that the show is perfectly cast would be an understatement. I caught a stellar group of actors the night I saw the show. What really struck me was not the individual performances (all of which were

incredible), but how this company worked as a team. We’ve all heard how teamwork is so important when doing a show, but I had never seen that at work better than on that night.

If there’s one thing that destroys a show for me, it’s people on stage “checking out,” “phoning it in,” or just occupying space without emotional commitment to the piece.

Heart is something an actor cannot fake. If even just one person up there is lacking in that department, the entire show collapses. One snarky look, one raised eyebrow that shouldn’t be… some actors think they’re getting away with it. The truth is, the audience cannot be fooled. And, sad to say, I’ve seen this happen more often than I’d like to admit.

Happily, that did not happen here. I don’t think I had ever seen a harder-working group of actors on a stage, committed to telling this story with every fiber of their being.

Yes, every principal sang like a dream with voices we would expect for the characters they played, but when there were duets… quartets… the women… the men… everyone together singing—that was when it was most magical. They were all “singing for Jesus,” as if this was the last show they would ever sing. And it was beautiful. From the opening chords until the very last curtain call, I was a total weeping mess. 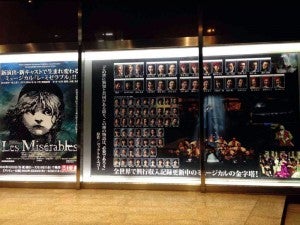 I was compelled to head backstage to congratulate as many members of the cast as I could. Thankfully, Yu Shirota was able to help me out. He escorted me backstage. The first one I met there was Natsumi Kon (Eponine)… then Rio Uehara (Enjolras), Tatsuya Kawaguchi (Javert), Mitsuo Yoshihara (Valjean), Yuichi Harada (Marius) and Kentaro (Thénardier). We posed for a few photos before I headed out to a late-night supper with friends.

Writing about this experience makes my heart feel so full… it’s probably the best production of “Les Miz” that I’d seen in a very long time. This is testament not only to Alain Boublil and Claude-Michel Schönberg’s timeless piece of musical theater, but also to the many hands in which it is being taken care of.

To everyone involved with the Tokyo production of “Les Misérables,” thank you from this humbled theatergoer. You have all inspired me as a performer, fueling my own desires to keep on singing full-throated and committed to telling stories the best way I know how. There are many other companies out there in the world that could learn a thing or two from you.