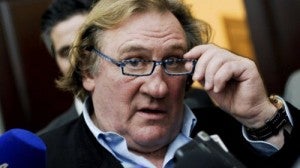 MOSCOW — French movie star Gerard Depardieu was slightly injured in a traffic accident in central Moscow, where he is shooting scenes of his latest film, Russian media reported Tuesday.

Depardieu, who recently gained Russian citizenship after denouncing exorbitant taxes in his native France, was riding in a minivan with five others en route to the lavish Metropol hotel when a taxi crashed into the side, Izvestia daily reported.

Depardieu is shooting a film called “Turquoise” on location in Grozny and Moscow, where he plays a father whose son is killed in Russia, while Elizabeth Hurley plays his love interest.

The accident came after Depardieu last week was ordered by a court in Paris to pay a fine and had his licence suspended for driving his scooter while drunk.

The accident occurred early Sunday, but details were only published Tuesday. Traffic police told the media that the taxi driver had run through a red light and did not even have a valid licence.

Izvestia ran a photograph of several policemen in reflective clothing surrounding the French star at the scene of the accident close to the Bolshoi theatre and Red Square.

Unnamed traffic police sources told Moskovsky Komsomolets newspaper that the taxi driver Dmitry Subbotin had been banned from driving until 2016 for drunk-driving but had continued to work for a taxi company.

Depardieu received his Russian passport during a dinner with Putin in January after getting into a fight with the French authorities over a new 75-percent tax on the super-rich.