Long before the love teams of John Lloyd-Bea, Kim-Xian, Kathryn-Daniel and Dingdong-Marian came to be, there was the 1970s legendary tandem of Guy and Pip—Nora Aunor and Tirso Cruz III. Since my mom was the official chronicler of their romance many heartbeats ago, both of them saw me grow up. I was privy to their off-guard moments. I remember that their doll, Maria Leonora Teresa, was left in our house for safekeeping. Too bad, my mom is no longer around to watch their much-awaited reunion in TV 5’s “When I Fall in Love.”

Actors come and go but only a few, like Guy and Pip, have endured the test of time. So let’s welcome back the iconic love team. Their chemistry on screen still works after all these years. This time around, the giddiness and kilig factor have been replaced by a secure, steady and stable kind of love. The Guy and Pip 2013 team-up serves to remind us that love does not always come with fireworks. It can also come quietly, gently and softly.

Here’s my tête-à-tête with Pip.

What is it like to work with Ate Guy after a long time?

It’s nice to be working with the superstar again. And I would like to thank ABS-CBN for allowing me to do this project for TV5.

What was  your  first meeting like after many years?

It was just like the many times that we saw each other every time we got to work [together].

Tell us about your telesine with Ate Guy.

“When I Fall in Love” is  directed by Joel Lamangan. Nora Aunor portrays Fely, my wife, who takes care of Armando (his character) who has pancreatic cancer. I can relate to some scenes because this sickness was the cause of the passing of my good friend Rudy Fernandez.

What kind of Guy and Pip will we see in your new series?

A more mature Guy and Pip telling a very meaty and serious story. 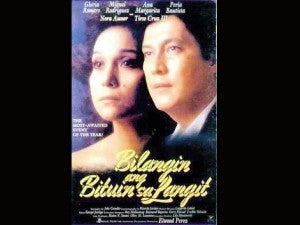 What’s your most unforgettable moment with La Aunor?

I guess it was when we did Elwood Perez’s “Bilangin ang  Bituin sa Langit” because it was a well-crafted movie and it earned us numerous awards.

How has Ate Guy changed since the last time you saw her?

Nora Aunor will always be Nora Aunor, the superstar, multiawarded actress and a great singer.

What are the things you have learned from Ate Guy?

She brings out the best in me (as an actor) in every scene that we do.

What impact has your love team with Nora made on your career and personal life?

The love teams of Guy and Pip and Vi and Bot (Vilma Santos and Edgar Mortiz) opened doors for our careers and [those of] all the other young stars during that era. Even if our love team was eventually dissolved, working together had honed us as actors. What we learned from each other, we applied to our careers when we went solo.

On the personal side, the four of us have remained good friends up to this time. As they say, “Iba ang may pinagsamahan.” It’s nice to know that, to this day, there is still clamor for Guy and me to work together again. “When I Fall in Love” is like our gift to our loyal supporters, who have been there for us all these years. 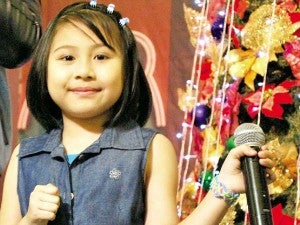 CHA-CHA Cañete will compete in Hollywood.

Cha-Cha Cañete, the adorable 8-year-old mainstay of ABS-CBN’s “Goin’ Bulilit” and Studio 23’s Anak TV awardee “Biyaheng Bulilit,” will represent Team Philippines as solo vocalist in the Junior Division of the 17th World Championship of Performing Arts  in Hollywood, California, from July 12-21. She happens to be my ahijada. I’m one proud godmother! Her debut album, “Bulilit Rockstar,” under Star Records, landed in Astrovision’s charts. Thanks to Moose Girl and Camella Homes for helping my darling inaanak’s dream come true!

Announcement: Michael Jackson fanatics like me who would like to attend the belated commemoration of MJ’s fourth death anniversary, MJ WorldCry, on June 29, Saturday,