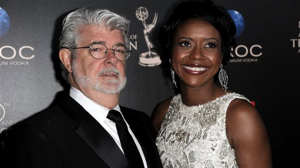 It’s the first marriage for Hobson, 44, an investment firm president and contributor to ABC TV’s “Good Morning America.” The two have dated since 2006. Former U.S. Sen. Bill Bradley walked her down the aisle.

The Saturday afternoon ceremony was performed by journalist Bill Moyers, who was once a Baptist minister.

Guests included filmmakers Steven Spielberg and Ron Howard, who said on Twitter that the wedding was “a joy to behold” and Moyers’ service “nothing short of profound.”